You must have gotten positive feedback about Omega 3 acids. There’s much hype about this health-giving compound. It isn’t just buzz, however: foods containing Omega 3 indeed do wonders for health. This post discusses their benefits and introduces you to a few of them.

Omega 3 Fatty Acids are polyunsaturated fatty acids. They have two ends – the alpha, or the beginning of the chain, and the Omega, or its tail. Fatty acids have double bonds, and how scientists name them depends on their location. Omega 3 acids earn their name because you’ll find them between the third and fourth carbon atoms.

Omega 3 acids facilitate metabolism. Animals can’t synthesize Omega-3 acids but can get short-chain ALAs to act as bases for long ones. Since animals can’t process Omega-3s, they’ll have to find another source for them. You can find them in Omega-3 foods.

Their Benefits for Human Health

Why all the fuss about Omega 3 foods? The answer’s simple – they have a host of science-backed benefits.

First of all, Omega 3 can help depression, which is one of the most prevalent, yet ignored disorders in the world. Research shows that people who take in Omega-3s are less likely to become depressed.

DHA is an essential structural component of our brains and retinas. You may have problems with vision if you don’t take in enough of them. This study reveals that it helps to lower the risk of macular degeneration.

Also, these fatty acids are crucial for brain development. Since DHA makes up 40% of the polyunsaturated acids in the brain, it’s not surprising that they promote brain health. A lack of EPA and DHA results in neurodegenerative disorders.

Researchers have found that children with ADHD tended to have low concentrations of Omega-3 acids in their blood. It can boost a person’s ability to process tasks.

People who suffer from metabolic syndrome have abnormally low metabolism and risk of developing diabetes, heart disease, and stroke. They tend to have high triglyceride levels, high blood sugar, excess fat, raised blood pressure, and low levels of good cholesterol. According to the American Heart Association, 23 percent of adults have this condition.

According to this research, Omega 3 acids can lower inflammation, insulin resistance, and heart disease risk.

If a patient has an autoimmune disease, his autoimmune system will mistake healthy cells for invasive ones and attack them. Type-1 Diabetes is an example of this condition. This study shows that taking in enough Omega-3s during infancy can reduce the risk of Type-1 Diabetes.

People with psychiatric disorders tend to have low levels of Omega-3 acids. This study proves that they can reduce depression.

People who take in the most Omega-3s have up to a 55% lower risk of colorectal cancer. It also limits prostate and breast cancer cells.

Asthma is a chronic disease that has symptoms like coughing, breathlessness, and inflammation. Asthma attacks can be fatal. They start because of inflammation and swelling in the lungs. This study links the lower incidences of asthma to high intakes of Omega-3 acids.

10 Omega 3 Foods and How They Will Benefit You 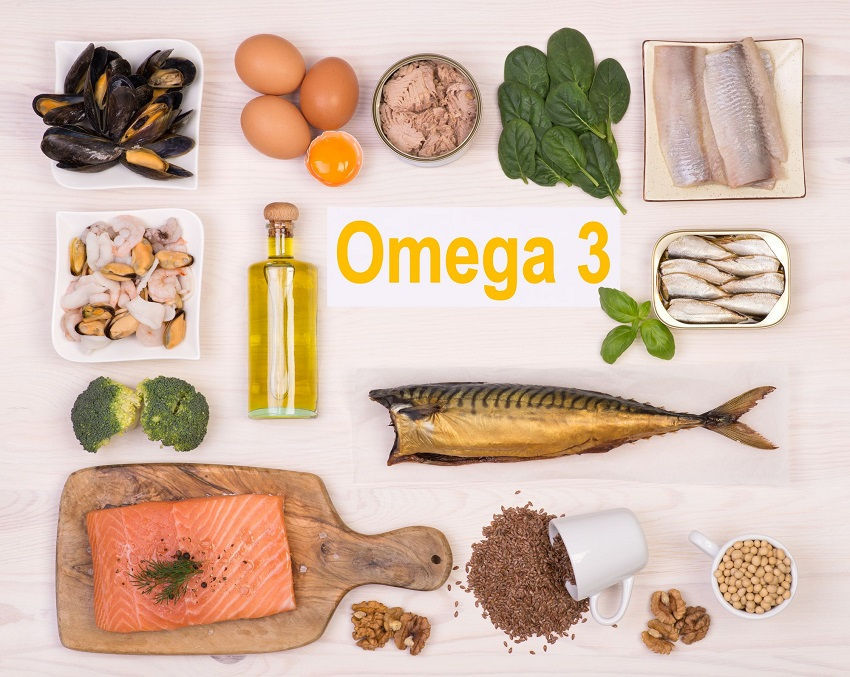 Omega-3 is ideal brain food. You can get your Omega 3 from natural sources if supplements don’t interest you, so here is a list of nutrient-rich foods:

First of all, is mackerel, which has 4107 mg of Omega-3 acids per serving. These fish are rich in Vitamin B12 and Selenium as well. Mackerel decreases the risk of heart disease. It can also lower triglyceride levels or unhealthy fat. This healthy fish also limits pain and inflammation.

Salmon is a nutrient-dense food that contains top-quality protein, selenium, and B vitamins. This fish contains roughly 4023 mg Omega-3 acids per serving. This study proves that people who eat lots of salmon have lower rates of depression.

Herring is a somewhat overlooked oily fish. It is favorite breakfast food in England, where chefs serve it with kippers. Besides having a stunning 3181 mg Omega Acids per serving, it also contains high amounts of Vitamin B12 and Selenium. Also, the herring is an abundant protein source. Unlike other fish, it has low mercury levels.

Oysters contain more zinc than other foods. Apart from having 565 Omega-3 Acids per serving, they have high levels of copper and Vitamin B12 too. Oysters boost heart health. They improve the immune system and enhance eye-wellness. They also enable brain function.

Another Omega 3 rich food is the humble sardine. Usually eaten out of a can, it makes a simple, but much-valued delicacy. Sardines have 2205mg Omega-3 acids per serving. They also have high amounts of Vitamins B12 and D. This study proves that these fish lower cardiovascular risk, metabolic control, and inflammation.

The tiny anchovy is another superfood rich in Omega-3. This fantastic fish has 951 mg of it per serving. It also works wonders for the eyes and promotes muscular contraction.

Caviar, or fish eggs, is a highly-valued luxury food. Fish roe has 1086 mg of Omega-3 acids per serving. This delicacy is also full of nutrients like Riboflavin, Folate, Selenium, Magnesium, and Potassium. Caviar is an antidote for depression, and some people feel that it’s as efficient as Prozac. It is also a solution for erectile dysfunction.

These small, brown seeds are probably the most abundant sources of ALAs. Aside from having 2238 mg of Omega-3 acids per serving, it is high in nutrients like Fiber, Vitamin E, Magnesium, Phosphorus, Protein, and Potassium.

Since Flaxseeds are high in ALAs, they are useful for preventing stroke. According to this study, it also has neuroprotective properties. They also reduce cancer risk because they contain Lignans. This study, which involves more than 6000 people, states that women who consume them are 18% less likely to develop breast cancer.

Chia Seeds also supply beneficial nutrients. Besides having a whopping 4915 mg of Omega-3 acids per serving, they are rich in Fiber, Protein, Calcium, Magnesium, Manganese, and Phosphorus. They are a rich source of Zinc, Vitamin B3, and Vitamin B1 as well.

These little seeds are full of antioxidants. They are fiber-rich and help with food absorption. Chia seeds also have protein, which curbs appetite, according to this study from Harvard University.

Walnuts complete any salad. They have an astounding 2542 mg of Omega-3 Fatty Acids per serving and are full of other nutritional benefits. Walnuts, according to this research, have higher oleic and linoleic acids than any other nut. The magnesium in them also decreases inflammation. These slightly bitter nuts also limit cardiovascular risk.

In all, Omega 3 foods strengthen the body in many ways. Try them and make yours healthier than before.

8 Different Ways to Reduce Stress with the Help of Music