If you suffer from a gluten allergy or have celiac disease, you know what an inconvenient, and painful condition it can be. The rates of gluten allergy have risen sharply and people are looking to get a better understanding.

Gluten as a topic has not gone away and probably won’t for a while. It’s been hard to open any magazine, website, or article that hasn’t touched on the gluten allergy issue. Some people had dismissed it and many others who suffer from it know that it is all too real.

It comes back to educating yourself in the best way you can and getting up to speed with all nutrition issues. Gluten is not understood by everyone but it’s important to boost your knowledge on the subject to see how it may pertain to you.

This article will share everything you need to know about gluten allergy including the causes and symptoms.

What Is A Gluten Allergy?

This is probably the best place to start as the concept of being allergic to a food may confuse people. Most people know of the deadly food allergies such as peanut or shellfish allergies but how does gluten stack up against these?

A gluten allergy (or gluten intolerance) is one of the top 8 food allergens out there and it’s an immune response to the gluten protein that is found in wheat. The most extreme example of this is a celiac disease where it’s a full-on autoimmune disorder where your immune system abnormally reacts to gluten.

This leads to the breakdown of the villi and microvilli which are in your small intestine and which absorb nutrients.

With celiac, you will have trouble getting proper nutrition and the condition itself leads to other issues such as:

They consider a gluten allergy Non-Coeliac Gluten Sensitivity or NCGS. It’s different from celiac but might present similar symptoms in people who are not diagnosed as celiac or even as having a wheat allergy. With gluten sensitivity people report discomfort after consuming gluten and experience some of the following issues:

It’s worth looking at this as some people still feel unfamiliar with what gluten is. Gluten is a sticky protein found in the seeds of grasses. We call these seeds grains and the name gluten comes from the Latin word which literally means “glue“.

Over time, the gluten can break them down until your left with a subfloor. This is where the incredible pain can come from for people experiencing celiac disease. This also can lead to leaky gut syndrome and the gluten can get through the gut and into the body.

When we talk about the immune system, you may think of it as a bodily organ but it’s a collection of cells and most of them exist on the other side of the gut. When particles like gluten get through this gut barrier your immune system attacks them because they are like an army defense and the gluten is a foreign invader.

The problem is your immune system recognizes the same characteristics of the gluten in other parts of your body and it turns on itself. One example is your joint and connective tissue which your immune system can think is gluten and attack.

These symptoms can mimic rheumatoid arthritis and leave you in a lot of pain.

Humans have been consuming gluten for thousands of years so why is something like a gluten allergy becoming more prevalent? It is because of the evolution and hybridization of gluten over the centuries. Gluten in its primitive form was called einkorn, and it was left over from the ice age when the glaciers retreated scraping back the soil allowing primitive plants to sprout up.

Einkorn was a simple iteration of gluten-containing just 14 chromosomes. The wheat of biblical times was known as emmer wheat and it had evolved more from the einkorn but was still more simple than the wheat of today having 28 chromosomes (Plants can double their chromosomes).

This version of gluten would last until the middle ages. In the 1960s world hunger became front and center and scientists worked to grow more food to tackle the problem. An American biologist named Dr. Norman Borlaug developed a high-yield version of wheat called the “semi-dwarf variant“.

They did this through a lot of science and development and it allowed for wheat yields to be increased tenfold. This was all done out of noble intentions but no one really looked at what all this genetic manipulation, and mutation, was doing to the wheat.

Famers who used to grow 8 bushels an acre were seeing other farmers now growing 80 per acre. This variety of wheat would obviously become much more prominent and profitable. If you see a modern wheat field today the “amber waves of grain” are gone and most plants are only 2-2.5 feet high with a thicker stalk and a denser amount of grains.

So all this selective hybridization and induced mutations gave us a plant with 42 chromosomes including the D-genome which greatly increased the gluten concentration. This form of gluten is much stickier and has more of a “viscoelasticity” which lends it well to make things like pizza dough.

Gluten and wheat are also cheap and you find it in more and more products. Anything that comes out of a box or package you can be sure contains wheat or has been in contact with wheat. The concentrations of gluten are now so strong this might be what’s responsible for the gluten allergy popping up in so many people today.

Since 2003, 1 in 133 people will develop celiac disease, and even more, may develop a gluten allergy. Dr. Alessio Fasano from Harvard is one of the leading authorities on gluten in the world and believes that humans have not evolved enough yet to digest and absorb gluten.

What Else Should You Know About Gluten Allergy? 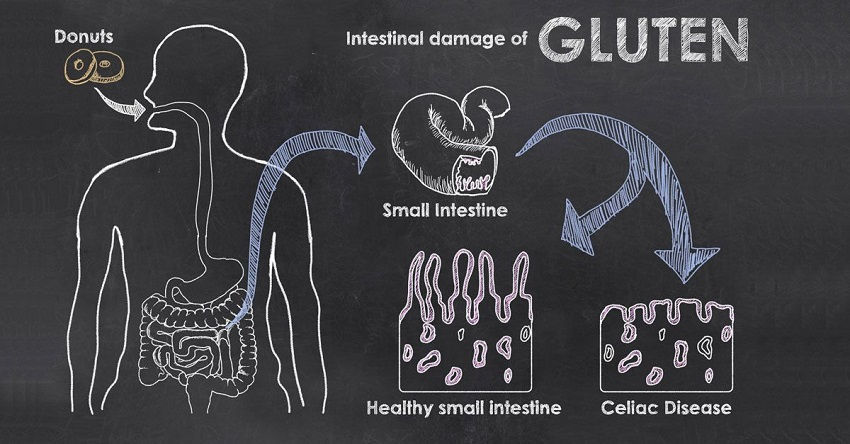 If you’ve experienced symptoms listed here after consuming gluten there’s the chance you may have a gluten allergy. And if it’s been getting worse, you must see a doctor to get a proper diagnosis. Maybe you’ve been getting less intense symptoms, in this case, you can do a food elimination test to see if a gluten allergy may affect you.

This involves gutting out gluten for at least a week, but ideally two. You then would slowly add gluten back in and pay attention to any responses after you eat it. If the cramping, headaches, brain fog, and digestive issues come back it can be a good indicator it may cause you a problem.

You can also do this food elimination test with eggs and dairy in case those are causing you issues too. The main thing is you don’t need gluten at all in your diet. It’s great for a treat but it’s not an essential nutrient or a required mineral that your body requires.

You may do yourself a favor by avoiding it as much as possible because you’ll also be avoiding a high glycemic starchy carb and one that comes with a lot of other inferior ingredients associated with it.

If you’re still wanting to consume it at least find the best quality, you can get. Look for bread that comes from real bakeries that use locally grown rye or wheat that’s organic. It will have higher fiber content and is milled and baked in more traditional methods.

At the least, avoid any white bread or pasta as not only will that have a high gluten content it’s overly starchy and quick acting in the body.

Jamie Logie, B.Sc.
Staff writer at Life Advancer
Jamie Logie is a certified personal trainer, nutritionist, and health & wellness specialist. He holds a bachelor of science (B.Sc.) degree in Kinesiology from the University of Western Ontario. He also has a counseling diploma from Heritage Baptist College along with multiple personal training and strength training specialist certifications.

9 Ways to Slow Down the Aging Process

8 Weird Ways a Man and a Woman Perceive Life Differently, Backed by Science