Your mother is the most important person in the world. She is the first to show you what love is. Your relationship with her defines many aspects of your personality and the way you handle your own relationships as an adult. But what if you were raised by an emotionally unavailable mother?

My mother may seem cold and distant at first, but on the inside, she is a caring, kind, and sensitive person. But even despite so, her inability to show her affection and handle her emotions has had long-lasting effects on my personality.

Today, we will talk about the vicious cycle of emotionally distant mothers and how their personality traits affect their children for a lifetime. However, I would like to emphasize that I don’t have the intention to talk about toxic mothers.

The toxic version of an emotionally unavailable mother is a woman who basically doesn’t care about her children. But today, we will focus on mothers who just struggle to show their emotions and talk about their feelings. So their emotional unavailability doesn’t mean that they are cold-hearted and careless individuals.

1. She cares about you but doesn’t show her affection

My mother was always extremely guarded when it came to showing her emotions, especially positive ones like love and affection. She rarely touched me and thus I learned to keep a distance from other people.

Hugs, kisses and this kind of stuff was never a thing in our family. And this emotional coldness was also present between her and my father. I’m not even sure whether I ever saw any sign of tenderness between them.

At the same time, I was raised by an overprotective mother. Two opposite behaviors from the same person. Controversial, isn’t it? This is another piece of evidence that seemingly cold people can often be deeply affectionate and caring.

Your mother is the first person to show you the warmth of love and trust. When she expresses these feelings neither for you nor for other family members, you learn to do the same thing. You form the belief that showing your emotions is a bad thing that makes you weak and vulnerable.

As a result, you will probably struggle to tell you dear ones that you care about them. The phrase ‘I love you’ will be the most difficult thing to utter. You will also do everything to hide your emotions from others, which you believe make you look weak. For example, if you want to cry, you will do it alone and will hate the idea of someone watching you this way.

2. She doesn’t praise or criticize you but is truly proud of you

Whether I achieved something great or did something bad, my mother barely gave me any feedback. When I shared my views or plans with her, she just carefully listened to me and said nothing.

Later on, I understood that she didn’t approve many of the things I had been doing or saying but never showed it. And I also learned that she was always proud of me which I had no idea about when growing up.

The truth is that my mother was, in turn, raised by an emotionally unavailable woman who, besides that, was also controlling and overly critical. So it seems that she didn’t want to repeat her mother’s mistakes and preferred to say nothing rather than criticize me.

When you don’t receive any feedback for your actions, it creates uncertainty and confusion. You grow up not knowing how capable or intelligent you actually are. Whether you are a good person or not. This is a recipe for a lack of self-confidence and often leads to imposter syndrome where you doubt yourself and underestimate your abilities.

3. She doesn’t talk about her feelings but is deeply sensitive

An emotionally guarded person struggles with showing their affection in the first place but also with talking about feelings in general. For this reason, you will never know how your emotionally unavailable mother really feels at any given time.

You will have no idea what she is going through and believe me, she will suffer a lot. Even if she doesn’t show it, she is a sensitive person who gets hurt too. Your mother will experience frustration, anger, and resentment like anyone else but will have to deal with it on her own. Needless to say that this creates all kinds of emotional blockages and suppressed feelings.

As a child of an emotionally unavailable mother, you will probably have this personality trait too. You will find it extremely difficult to talk about your feelings – whether positive or negative. This doesn’t necessarily mean that you don’t know how you feel. You may know it very well but just feel extremely uncomfortable sharing it with another person.

4. She gives you the silent treatment but is profoundly affected by every conflict

When conflict arises, your mother will never face it. She will become even colder and more reserved than usual and will simply ignore you. On the inside though, she may feel deeply hurt, but you will never know that.

The silent treatment can be an extremely damaging and manipulative tactic, but it doesn’t always come from toxic people. Oftentimes, it is used by people who don’t have a good touch with their emotions and have trouble talking about their feelings.

Eventually, you will learn to deal with conflict in the same way. Instead of facing it and handling it in a healthy manner, you will most likely just avoid it.

You may then give the silent treatment to your loved ones too. You will never make the first step to resolving the conflict and will struggle to apologize. Just like ‘I love you’, the phrase ‘I’m sorry’ will be one of the most impossible ones.

What Is the Difference Between a Toxic Mother and an Emotionally Distant Mother? 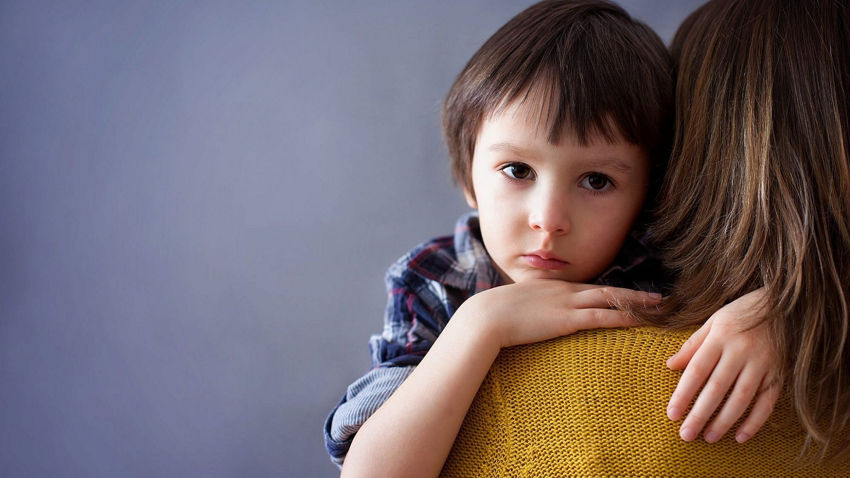 As you have seen from the above, this article doesn’t describe a toxic mother. So you might wonder what the differences are. They are many, but they all come down to one basic ugly truth – a toxic mother genuinely doesn’t care about her child.

She may have a personality disorder or just be hard-hearted. She may hate her kids for some reason, for example, she didn’t want to have them in the first place or was abused by their father. There are many possible reasons why a mother may become toxic and emotionally unavailable.

So what are the differences between being a toxic mother and being an emotionally guarded mother?

1. A toxic mother can be selectively unavailable

Let me use the example of a narcissistic mother. There are a few different roles in a dysfunctional narcissistic family. One child may be loved, praised, and admired while another one may be neglected, blamed, and abused.

So, of course, these two children will have a totally different idea of their mother. Thus, a toxic mother will be emotionally unavailable only to the child who plays the role of the family scapegoat.

A woman who only struggles with expressing her emotions will never do that. She won’t show preference and will be equally unemotional and unaffectionate with everyone, whether it is her child, sibling, or husband.

2. A toxic mother’s actions will reveal her indifference

A toxic emotionally unavailable mother will ignore your wishes and will impose her expectations on you. She won’t be there for you if you get in trouble. Most probably, she will just blame you for everything and won’t show the slightest understanding. She may be dismissive about your feelings too and won’t mind making unkind remarks and mocking you.

On the contrary, a normal mother will be genuinely concerned. No matter how much affection she shows, she will listen to you and will be there for you if you need her help. Actions speak louder than words, remember? Watch your mother’s actions and you will understand if she cares about you.

3. A toxic mother uses and manipulates her children

Any type of emotionally unavailable mother may behave in a passive-aggressive manner from time to time. After all, such a person can’t handle conflict in a healthy way. However, a normal mother will never get cruel and manipulative. She will never take advantage of you or play the blame game. Remember that she doesn’t want to see you suffering and thus won’t make you feel bad in any case.

But not the toxic mother. She will use the silent treatment and other psychological games to make you feel guilty and worthless. She may use you as well. Narcissistic mothers commonly use their children to satisfy their own selfish needs.

My emotionally unavailable mother had one herself. And I may become one too in the future. It’s a vicious cycle that is not easy to break. After all, emotional unavailability tends to be an innate trait, such as introversion/extroversion or a temperament type. You can only learn to handle your emotions in a healthier way, but you will never become a warm and open person.

Still, if this article resonates with you and you are certain that your mother is not a toxic person, I would like you to remember one thing. She does care about you but is just not good at showing it. Be kind to her, she struggles with her emotional unavailability already.

Were you raised by an emotionally distant mother? Can you relate to the above? If you have something to add or would like to share your story, please use the comment box below.

Are You in Love or Do You Just Feel Comfortable? How to Tell the Difference

Dog People Have a Lot of Friends, Cat People Tend to Be Single, Facebook Study Reveals