The idea of taking at least two liters of water every day is quite popular around the world.

Medical experts, both the certified and the self-proclaimed swear by it.

Bottling companies make sure that somewhere on the bottle label, they will stress how absolutely vital it is to drink two liters of water a day and how much of a treat you are giving your body by indulging in their product.

The truth, however, is that an overwhelming majority of people still take a glass of water a day, sometimes two for those who are ahead on the ‘water challenge’.

Well, water is proven to account for about 60 percent of your body weight (depending on age and gender) plus it performs crucial functions in the body, such as aiding digestion and keeping joints lubricated.

So, it’s essential to stay hydrated by replacing the body’s normal water losses (through breathing, sweating and, obviously, excretion). But is this seemingly monstrous task of taking two liters of water actually possible?

The Water Challenge By Will Fulton

A curious journalist, by the name Will Fulton, decided to try the Water Gallon Challenge. This basically involved taking a gallon of water every day for a month!

Upon doing a quick Google search, I discovered that a gallon roughly equates to 3.7 liters or sixteen glasses. Think about that again, taking 16 glasses of water a day for a month. The thought itself is quite daunting.

Fulton had two major hurdles in the water challenges. To begin with, getting himself to drink all 16 glasses worth of a gallon faithfully. To deal with this problem he carried his gallon everywhere he went including to the office, to his car, and even to bed – which goes without saying, ‘someone’ was probably not pleased about sharing a bed with someone obsessed with some kind of water bottle.

Anyway, on the first day, he forced himself to chug down to the very last drop even as late as a few minutes to midnight. This felt like an accomplishment, after all, how many men can confidently stake claim to having taken four liters of any drink?

Of course, not counting the gentlemen who spend hours in the bar chatting and drinking beer one crate at a time.

The other hurdle in the water challenge was having to carry around a 4-liter capacity bottle literally everywhere as he figured it was easier to take it full gallon rather than dividing it by cups on the daily. 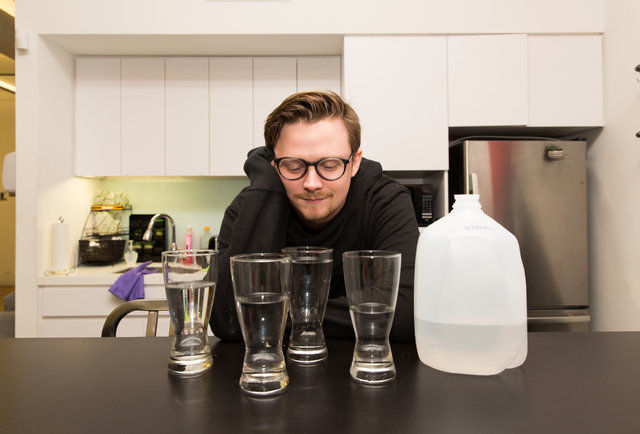 Day 5; Fulton Is Peeing Every 20 Minutes & Everyone In The Office Think He Has a Drug Problem

Fast forward to day five and Mr. Will was still trying with continuously drink even when he was not thirsty. He points out, “If you feel thirsty, it means you’re already dehydrated”. However, by this time he had already overcome the first part of the water challenge i.e thirst, but the other challenge was that he had to pee a lot.

On the other hand, some positives started coming along with his experiment: One, he did not eat a lot anymore as he just did not feel hungry plus he felt a marked increase in his energy levels. His hair also felt nice, silky smooth. He, however, notes that drinking a gallon a day had still not gotten any easier. 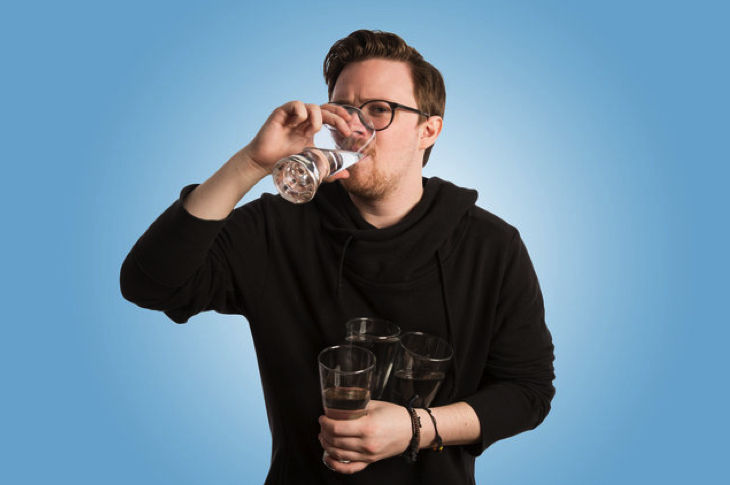 2 Weeks Into The Water Challenge: He Is Feeling Refreshed & Energetic

A fortnight into the Gallon Challenge experiment and the benefits of taking in all this water really kicked in. He felt like a “ball of energy” and he no longer needed the regular 2-3 cups of coffee every day to keep him going.

That was a brilliant step away from caffeine he was so accustomed to. He even felt that he moved little faster in his “nightly runs”. He slept better too – the sort of refreshing sleep that comes as a result of not having to toss and turn in bed due to excessive heat in the body.

Most crucially, by this time it became easier to drink the whole gallon in a day. In fact, he felt extremely thirsty when he wasn’t drinking. What a difference a fortnight makes!

Three weeks later, his colleagues at work described him as being considerably less grumpy. Somehow, he thinks the water had something to do with uplifting his spirits.

Day 25: His Work Life Had Improved

By day 25, the compliments started coming in. His girlfriend asserted that his skin looked better, his editor begrudgingly admitted that his journal work had improved a notch. Even his pee became crystal clear, which is probably not so much of a compliment, but a feel-good factor. The thrilling energy still coursed through his veins.

Day 30: The Water Challenge Ends & Fulton is Happy To Have Found Out The Importance of Drinking Enough Water

By day 30 at the conclusion of this experiment, Fulton says “I think drinking a full gallon of water is a little excessive, but I did realize that I certainly had not been drinking enough this whole time.” This was probably a sentiment borne out of his body adapting to a super-hydrated state.

Well, that was one hell of a water challenge! However, we do not advocate for a gallon of water a day, as we are of different body sizes and in different occupations but still, the benefits of increased water apply to Will Fulton as they will to everyone who puts in some effort.

So, why not start your own water challenge today and see the benefits that water can have on your life?

17 Silver and Blonde Ombre Hair Ideas to Try This Year