An abusive relationship, for many people around the world, is nothing new. However, there are several warning signs.

One of the most serious issues in the world is domestic violence.

An abusive relationship passes under the radar so many times due to the fact that no one really knows or understands that it’s happening. It resides beneath a cover of a seemingly normal union.

It’s challenging to approach this issue and attempt to help because, honestly, it is well hidden.

Outside the household, most people are simply unaware and see the relationship as ideal.

There are reasons for this as well. Most times the victim attempts to alert someone of the problem, but the abuser is just too good at wearing a mask and lying to others about the relationship. It’s sad.

One of the best ways to protect yourself against an abusive relationship is to understand and become familiar with the signs. You will start to notice things that point directly toward the chances of future violence.

Heed these signs and do what you need to do to protect yourself. Most importantly, get help and never stay in an abusive relationship if your partner is not willing to change their ways.

Right from the beginning, if your partner is prone to abuse, you will notice that they display intense emotions. They will immediately bombard you with texts and phone calls.

They display grand gestures of kindness and try to win over your family and your friends. To those who aren’t familiar with this sign, it will seem as if your partner is just a really good and caring person. Sometimes, however, too much/too soon, can mean trouble.

A little jealousy is not so bad, but being jealous constantly could signal a future problem. Those who show strong jealous feelings will act irrationally and get angry when you interact with the opposite sex. Watch for this type of jealousy, it could be a sign of abuse.

Criticism, believe it or not, is a form of manipulation, if not an outright insult. If you are being called ugly, overweight or stupid, then you could be dealing with someone that will become violent in the future.

Someone prone to domestic abuse will try to make you feel worthless in order to retain control.

When your partner starts to display negative behavior such as tantrums or throwing things, later on, they will blame you for these actions. They are unable to accept the fact that they have a problem.

“If you hadn’t said or done certain things to irritate me then I wouldn’t have gotten so angry.”

“Look what you made me do!”

Do these statements sound familiar? If they do, then, unfortunately, you are dealing with a potential abuser. Relationships tend to fall apart quickly when partners start to blame each other. When the blame is one-sided, then it falls into a toxic category.

Doing things to disrupt your job or school, like starting fights or taking your belongings is called sabotage. If your partner is hiding your keys to keep you from leaving home, then there’s definitely a problem.

The abuser usually craves attention and anything, especially your ambition, will get in the way of their spotlight. Doing everything they can to direct attention back to themselves will make them feel like they have made their point.

They generally do not feel guilty and will repeat the behavior until they have what they want out of the relationship.

When an abusive relationship is present, you will experience what’s called isolation, where your partner will try to convince you that no one else really cares for you like they do.

They will try to keep you away from your family and friends by telling lies and starting fights. Over time, you will spend less and less time with the other people you love. Eventually, you will lose touch altogether with most people you used to associate with.

There are many forms of control, and your abuser will use them all. They will go through your phone, your purse and any of your other personal belongings. Or even, they will demand to know everything you do when you are away from them.

They will show up at your job and even follow you when you aren’t aware. All aspects of your life will be under a microscope, observed and scrutinized. Their goal is to leave no doubt in your mind that they are in control of everything.

If your partner is constantly overreacting or picking fights, then you just might be part of an abusive relationship. Everyone loses their temper occasionally, but an abuser will have mood swings and tantrums which will resemble a child becoming angry.

They will get especially mad in situations where they cannot get what they want and when you disagree with their point of view. In certain situations, they will resort to physical violence.

More things to watch out for:

Now that you know the signs and understand the implications, it’s time to do something about this. Most of the time abuse in relationships does not go away. It is a dangerous situation that can lead to harm or even death.

If you are experiencing these indicators, do not delay. Get help or get out of the situation entirely. Your life is worth so much more than remaining in an unhealthy relationship. 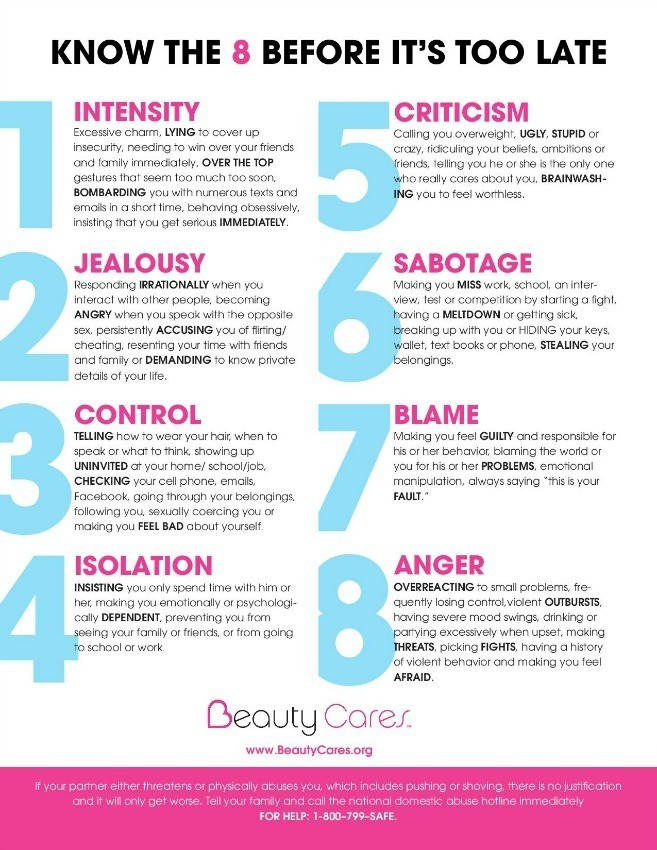