The attitude that is conditioned into our psyche from a young age is that we have to learn a skill and use that to get a job in order to earn money, which in term feeds the growth of the economy.

One question I think almost every day but I find many other people don’t give it a second thought is why do we have to work?

“Normal is getting dressed in clothes that you buy for work and driving through traffic in a car that you are still paying for – in order to get to the job you need to pay for the clothes and the car, and the house you leave vacant all day so you can afford to live in it.” ― Ellen Goodman

Why do we have to work?

At face value and viewing life through the brainwashed society we are all born into, the answer may sound rather obvious, we need to earn money to purchase material objects in order to survive. For most that make sense and needs no further questioning.

However, one must ask in a world which fundamentally has enough natural resources to feed clothe and house every single person why there is such a work ethos.

We are led to believe that we are running out of resources and the world is overpopulated when, in fact, the reality is completely the reverse. If we were to gather every man, woman, and child and moved them to Australia, the whole world population would fit comfortably within the country.

Each family having their own house and garden and that would still only fill 3/4 of the land mass.

What is Scarcity? How is it used? 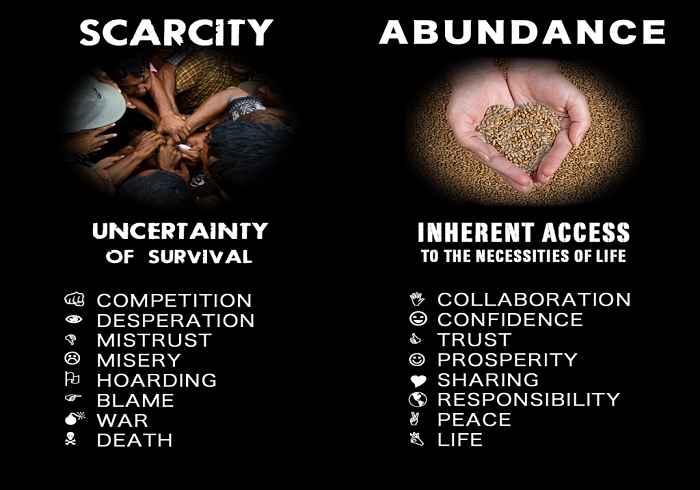 Scarcity is a tool used to create the feeling of not having enough. This creates a survival response and an automatic panic in humans which causes us to be selfish and greedy. We are very much led to believe we are living in scarcity times by the mainstream media. There is always something was running low on. Land, oil, energy, money, food, water, to name a few.

We witness African and Ethiopian communities starving and dying of disease and we are led to believe this is because there just is not enough food to give them. Not once do people in the west ever stop and think just how much food is wasted on a daily basis.

In 2004, a USA study showed that in America alone forty to fifty percent of all food ready for harvest never gets eaten. There is clearly no shortage of food. The richest nations are choosing to let the third world people die while they continue to exploit their resources.

What is wrong with our society?

We live in a debt-based monetary system where money is created by banks in the act of just placing digits on a screen. Our governments then loan money from privately owned central banks that have secret (protected by legislation) shareholders that the public is not even allowed to know about. With absolutely no oversight.

The richest 1% own nearly half of the world’s wealth and are also in positions of power. The 99% of the world’s people are left to scrap over the remainder in order to survive. I also personally believe technology is been suppressed in the energy sector that could end the fossil fuel industry overnight.

We spend most of our lives just taking as fact what we are being told by our institutions – education, government, parents, and media – without giving it a second thought. In fact, humans have become so docile that we spend most of our days unconscious, engrossed in the latest gadget or celebrity gossip.

This is all by design to keep us distracted from anything real going on in the world. We clearly live in a corrupt unjust society that rewards dishonesty and selfishness. There is enough to go around and waste and pollution seem to be the byproduct of unsustainable growth and greed based ideology.

Ok, So Why Do We Have To Work?

The fact of the matter is we have to work because we are free ranged slaves controlled by people of wealth who use the monetary system and energy sector to control and protect their own selfish interests. The monetary system is also manipulated by the same people using stock markets and banking practices.

This is also all by design in order to keep the wealth in the hands of a selected few, mostly banking elite and royal bloodlines. These same people also control all aspects of our lives from education, health, media, and food. With this much control over our lives is it any wonder the majority of people feel confused over world issues.

The role of the media and institutionalization.

Our media is in place to control the mass way of thinking to keep it in line with government policies. Call it propaganda. We are led to believe we have a free press, but this is far from the truth and very obvious when big movements happen like March Against Monsanto and the Occupy Movement and receive little to no media attention.

Even if it does get some attention, it is always portrayed in a negative light. Our newspapers front page headlines are always filled with fear words like “conspiracy”,”terrorism”, “ISIS”, “extremism”, “workshy”, “scroungers,” etc. that are repeated over and over to really embed the words into the human consciousness.

If you repeat anything enough times, people start believing it. It is an obvious form of brainwashing and is used widely by politicians and the media.

The same tactics are used on any subject they deem does not fit into the government’s agenda.

Divide and conquer tactics have been used by empires for thousands of years. The media does this brilliantly by making people divided and suspicious of each other. We are forced inwards to the point of not even knowing our neighbors’ names. This is why our communities are failing. One big keyword used is “immigration”.

Everything is immigrants’ fault this is yet another tactic called misdirection where they focus on one area. Divide opinion. While our attention is focused where the game pieces are being moved elsewhere. This is only scratching the surface. The same patterns can be seen in all areas they control.

Why should we not be forced to work?

I believe every human being on this planet is equal and is entitled to a life. Every human should have a right to life, and this means everything they need to survive. Everyone should have a basic wage (not a benefit) but a living wage that is given to everyone at birth.

This basic wage should cover all the costs of living, including food, water, housing, and clothing. No one should be forced to work and any work should be on a volunteer basis. If the wealth was divided up equally around the world, this would be easy to achieve.

How would anything get done? Humans are lazy, right?

With the media, monetary and central control removed focus would naturally move to a community-based structure. We would need to converse with our fellow neighbors to survive and naturally, the trust would grow and a family environment would blossom.

Health would improve, crime would fall as everyone’s needs would be met. With time to live life and care for others, we would have time to volunteer skills to the community. Bartering could come into effect. I will fix your taps if you fix my garden fence etc.

For those who do not have any skills or may be disabled, people would still volunteer to help them in a caring community. Humans are very kind, loving and helpful by nature. If we see someone fall in the street, our natural reaction is to go and help.

When I have a few weeks off work, I always look forward to returning to something to do. To much time is boring and, I believe, we would all do our best if we were rewarded in the community for our efforts even if it is just benefiting from the knowledge that we have contributed to the whole.

Local growing projects and a sense of pride will come back into the community. Cooperation and creativity are given room to flourish. Within this environment, new ideas could flow.

“You cannot solve a problem from the same consciousness that created it. You must learn to see the world anew.” – Albert Einstein

This is how life was supposed to be.

Is it an impossible dream? Could it work? What problems do you think this could bring?

How to Find Your Dream Job: Everything You Need to Know

Wildlife Reclaims Yosemite National Park in the Absence of Tourists

Beginning of a New Era