I want you to remember one of those fantasy movies that TV played during the holiday season and usually starred some faerie or mermaid story of sorts.

Normally, the faeries/mermaids/whatever would have a banquet at some point in the movie, and you’d hear this beautiful, graceful, ethereal sound. I want you to remember that sound. And now I want you to imagine it coming from a UFO-shaped drum.

And now you are probably very confused and staring at your screen in a “What were you smoking?” kind of way. Hell, I don’t even know if your TV played Faerie movies during the holiday season. Mine did. Sucka. Ahem.

Back to the celestial sounds. They are actually very much Earthy sounds, produced by a musical instrument called the Hang Drum.

Its creators, named Felix and Sabina, from Switzerland, actually consider this a mistaken name and discourage it. The actual name of the instrument is simply “Hang”, the Berndeutch word for “hand”, simply because this is a handheld instrument.

Berndeutch literally translated to “Bern German”, a.k.a. the German spoken in the region of Bern, and some surrounding regions. To put it simply, it is a form of Swiss German.

Now, what exactly is the Hang Drum?

Firstly, as a musical instrument, it belongs to the Idiophone family. This means that they are essentially percussion instruments, that create sounds through the vibrations caused by being struck.

The Hang Drum is constructed as follows:

Two metal plates are bended and turned into a half-shell shape. These are then glued together, leaving the inside hollow. The end result looks very much like a stereotypical UFO. The top side is called a “Ding“. On the Ding, there is eight to nine indentations in total. 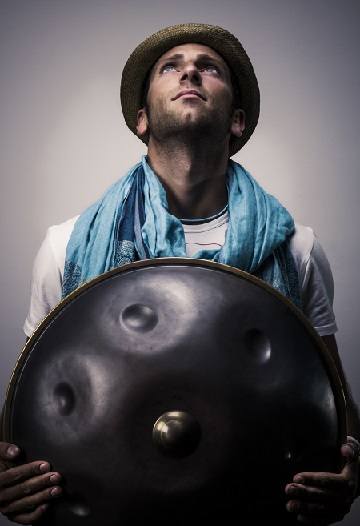 One for the central note, and the rest small ones around the central one, functioning as “tone fields“, thus creating a different sound and harmony depending on where the plate is struck, and the force used. The bottom plate is called “Gu“. It only has one note.

It is very important that the Hang is played with one’s hands, in order to produce its trademark sound, which is softer, and a bit lighter and warmer than that of traditional percussion instruments. The sound can be compared to that of bells, a harp, or metallic wind chimes.

What I personally find very charming about the hang is that the end result depends on how one uses their body; where they place their hands, with how much pressure, and where they put their legs and feet to support the drum, as well.

I find it to be an excellent empirical lesson in grace and gentility. It makes one become a little more self-aware of their movements and to be more in tune with themselves.

Is it easy to acquire a hand drum?

Of course, nothing good in life comes without a price, and the hang drum is no exception.

However, its price is somewhat dreadful, not because of extreme monetary value, but because it is just so damn difficult to actually acquire a hang drum. The production process is complex, especially since the instrument gets modifications and updates each winter season.

To get a drum, one has to probably travel to the Hanghaus to pick and order one, or be prepared to wait a long, long time for it to arrive, provided of course that by the time their turn is up, demand won’t have exhausted the stock.

Despite these difficulties, I am quite tempted to try it out; how about you?

Why Freelancers Should Organize a Home Workplace: Infographic

Why You Should Never Drink Your Coffee Before 9 A.M. Again