Satellite Shelter: A Sleeping Bag That Transforms into a Tent Could Provide Refuge to the Homeless

This Satellite Shelter Provides a Really Good Solution for the Homeless of the World.

The world is a frightening place, wouldn’t you agree? But have hope, there could possibly be a bit of humanity left.

One of the areas where we still see that spark of goodness is on the streets. Yep, you heard it right. In the same places where heinous crimes frequent, we see the seeds of goodwill.

The homeless are pretty resilient at living on the streets, for the most part. The spring, summer and autumn months are tolerant. Being homeless during the winter months, however, can be a different story.

You wouldn’t think that temperatures of 50 to 32 degrees would harm the homeless, but it does. Hypothermia can set in anywhere between those temperatures and winter shelters aren’t open until it gets much colder. In Des Moines, Iowa, it has to reach 20 degrees and temps have to plummet to 13 degrees in Baltimore, Maryland, for winter shelters to open their doors.

What? There are large numbers who suffer and even die because of this situation. But guess what, those numbers could drastically decline because of a recent solution.

Michael Stoops, director of community organizing at the NCH told Think Progress a couple years ago,

Lives are saved when communities open additional shelters during spells of cold weather. Keeping shelters open all winter long, and not just when the temperature drops beyond a certain threshold, would be the best way to help the homeless community get through the cold weather season.

That’s exactly where we’re going with this story. There is a shelter solution, the “satellite shelter”.

Sorry death, not this time.

One of the best entries was an over-the-shoulder refuge, coming in at a second place in the competition. It must have been something special!

Wouldn’t you know it, they used space technology. The over-the-shoulder refuge also referred to as the “satellite shelter”, is both a tent and an insulated sleeping bag. It isn’t just a “transformer” either. The refuge is portable with wheels and straps, making relocation much easier for the individual. 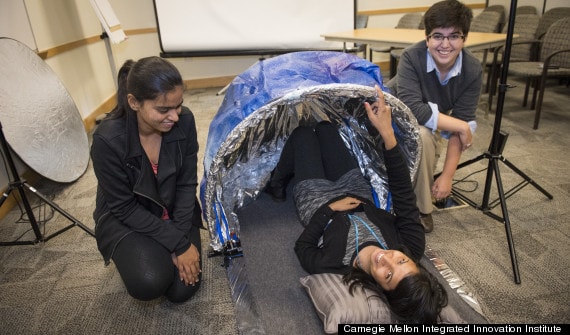 One of the team members spoke on the project,

We wanted to make sure it was super portable and durable, so that it’s easy to carry.

This is exactly what they did. Don’t you just love young hungry minds? It seems we’re bringing humanity back to any otherwise dark world, wouldn’t you think. We thank you, and cannot wait to see how humanity rises to the occasion once more!

There’s still hope, after all.

About the Author: Sherrie Hurd

Sherrie Hurd is a professional writer and artist with over 10 years of experience. She is an advocate for mental health awareness and nutrition. Sherrie studied Psychology, Journalism, and Fine Arts, receiving an Associates in Marketing. She has written for Beacon, a southern college publication, and is an author of a full-length non-fiction novel. Sherrie spends most of her time giving life to the renegade thoughts. As the words erupt and form new life, she knows that she is yet again free from the nagging persistence of her muse.