This thought-provoking social experiment with 5 monkeys reveals the true nature of human behavior and explains a lot about our society.

A group of scientists placed 5 monkeys in a cage and in the middle, a ladder with bananas on the top.

Every time a monkey went up the ladder, the scientists soaked the rest of the monkeys with cold water.

After a while, every time a monkey went up the ladder, the others beat up the one on the ladder.

After some time, no monkey dare to go up the ladder regardless of the temptation.

Scientists then decided to substitute one of the monkeys. The 1st thing this new monkey did was to go up the ladder. Immediately the other monkeys beat him up.

After several beatings, the new member learned not to climb the ladder even though he never knew why.

What was left was a group of 5 monkeys that even though never received a cold shower, continued to beat up any monkey who attempted to climb the ladder. 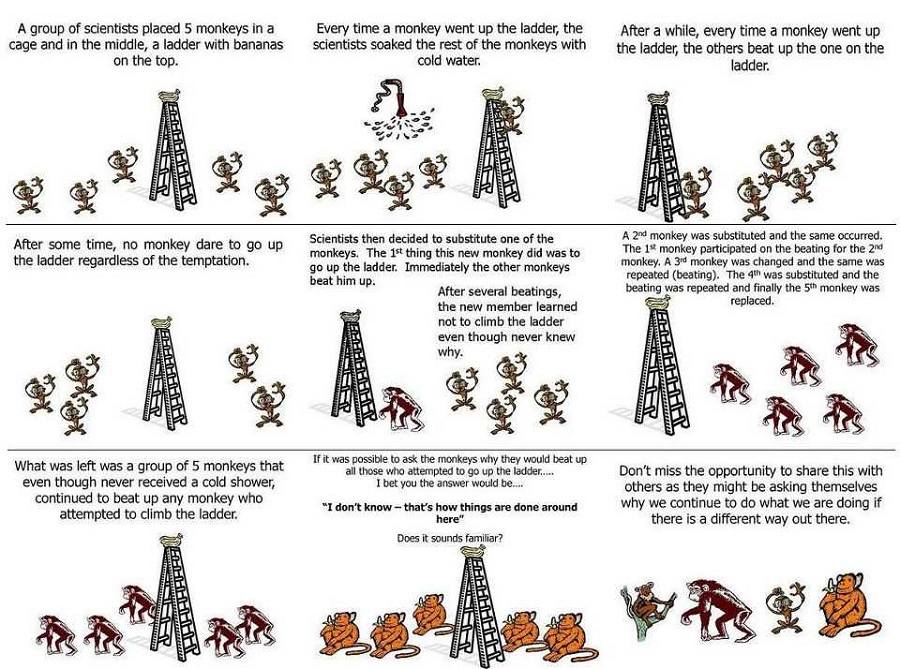 If it was possible to ask the monkeys why they would beat up all those who attempted to go up the ladder … I bet you the answer would be … “I don’t know — that’s how things are done around here” Does it sound familiar?

Don’t miss the opportunity to share this with others as they might be asking themselves why we continue to do what we are doing if there is a different way out there.

This seems like an experiment, but now I’m wondering… Was this experiment ever conducted? If not, was any similar experiment conducted that shows the same effect?

Toxic Family Members and How to Recognize Them

Being an Independent Woman Comes with These 4 Struggles