The Good Country Index ranks 125 nations based on how much they do for others globally in seven areas: science and technology, culture, international peace and security, world order, planet and climate, prosperity and equality, and health and well being.

The ranking was created by merging of 35 data sets produced by organizations like the UN, WHO, and UNESCO over a period of nearly 3-years, according to The Economist.

“What I mean by a ‘good country‘ is a country that contributes to the greater good,” Simon Anholt, an independent policy advisor who made the index, told Business Insider. “We’ve given each country a balance-sheet to show at a glance whether it’s a net creditor to mankind, a burden on the planet, or something in between.”

DISCLAIMER: Anholt’s expertise has been at the service of individual governments, it is unclear if he was paid for his research.

Here are the key findings from the report:

here is the full index 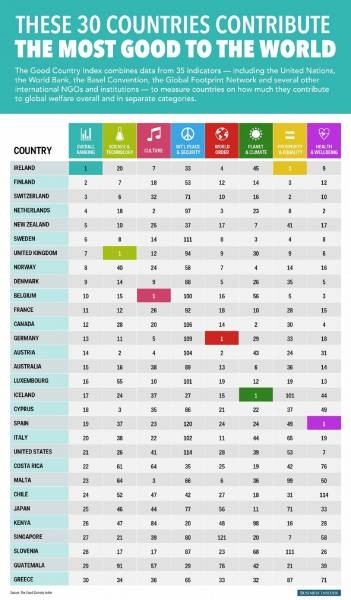 Ireland Contributes The Most Good To Humanity

For the size of its economy and a combined score in all seven categories, Ireland outranks 124 other nations in contributing the most good to the global community.

Europe Contributes The Most Good To Humanity

An overwhelming majority of the top 30 nations listed on the index are European, making this region the most significant ‘cluster of goodness‘ in the world, according to the report.

Nine European countries hold a position in the top 10 spots.

The United Kingdom ranks 7th overall and holds the highest position in the ‘science and technology category.’

Belgium, Malta, and the Netherlands lead Europe in the exportation of creative goods and services, offer lax visa restrictions and aim for strong freedom of the press movement.

Although Germany contributes more than any other country in the World Order category — which measures indicators like charity giving and a number of UN treaties signed — Germany’s overall ranking (13th) is slightly compromised by a low ranking in the ‘international peace and security’ category. The country receives a rank of 109th because the index penalizes countries involved in significant armed conflicts abroad as well as arms trade.

As the United States begins to slowly creep back into Iraq to slow the rapid territorial gains made by ISIS extremists, the Americans take a low ranking in the ‘international peace and security’ (114th) category.

Outside Of The English-Speaking Realm

The highest-ranked country outside of Western Europe and primary English-speaking nations is Costa Rica at 22nd. Other Latin American countries within ballpark are Chile (24th) and Guatemala (29th).

“For me, the best result was Kenya ranking 26th, as it demonstrates that contributing to the greater good doesn’t have to be a question of money,” Anholt wrote via email.

Libya holds the last spot in the Good Country Index, next to Iraq and Vietnam. Russian ranks 95th overall, on par with nations like Honduras, Kuwait, and the Democratic Republic of the Congo.

5 Smart Ways to Use Biodegradable Waste to Help the Environment

Psychic Phenomena: Why Do Scientists Deny It?