Someone Transformed This Tree Stump Into a Fancy Hobbit House

Do you remember those awesome hobbit houses from The Lord of the Rings? It seems that someone has built a sort of hobbit house on a Canadian island.

The Haida Gwaii, translated into “the islands of the Haida people”, previously known as the Queen Charlotte Islands, is located on the North Coast of British Columbia, Canada. Apart from the abundant wildlife and the Haida people (indigenous people of the Pacific Northwest Coast), the islands are also home to insanely large trees.

Trees that leave behind stumps big enough to be carved into a little house, albeit not with all the luxuries and comforts we are nowadays used to having. The person who decided to test this theory out was Noel Wotten, of the Sitka Studio located in the town of Tlell.

Among tree carving, his other interests include art and fly fishing. Noel’s initial material wasn’t even a stump; it was the remains of a fallen Sitka Spruce tree. The Sitka Spruce is known to be one of the largest conifer species in the world, with a capacity to reach 300ft in height!

Noel began his work by hollowing out the tree stump. And he got right to carving, for twenty-two years that’s how long it took for the finished result to see the light of day. These twenty-two years show on the work, in the form of photographs, memorabilia and other sentimental bits decorating the interior of the tree.

Among them are little notes, objects, and pictures of some of the people who not only helped with carving the tree but simply saw it grow to become the fairytale-like creation it is today. Some of the people to have stepped in the tree were musicians like Paul Quarrington, who used it as a music room, due to its acoustic capacity. 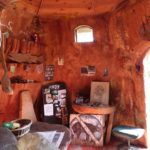 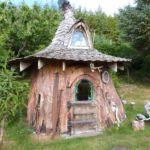 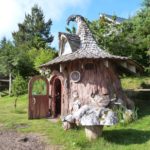 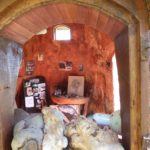 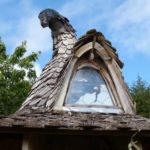 Aside from the memorabilia, the interior shows the works that were put into it; shelves, door, windows and window ledges, all have been hand carved by Noel. But the outside, some would argue, is even more picturesque than the interior.

The details on the roof remind of a wizard’s hat, and a little wooden mushroom is carved in the makeshift “garden” outside the tree.

The tiny windows, the small details, and carvings of the exterior, even the little signs surrounding the property to “keep outsiders out” (a humorous statement itself), they all transport one back to a more mythical universe.

It’s certainly a sight that would please many fans of J.R.R. Tolkien’s Middle Earth world verse, perhaps even the author himself, was he able to see it today.

Sofia Papadima, LL.B.
Contributing writer at Life Advancer
Sofia has a bachelor degree in law. She is moonlighting as a writer and aspiring to one day gather enough experiences and turn them into ink and paper. The intricacies of the human mind and its peculiar ways have always fascinated her and urged her to explore more, not only the human mind but humans and humanity as a whole, hopefully leading her to interesting findings. Sofia is a literature, music and movie geek to boot.
Latest posts by Sofia Papadima, LL.B. (see all)