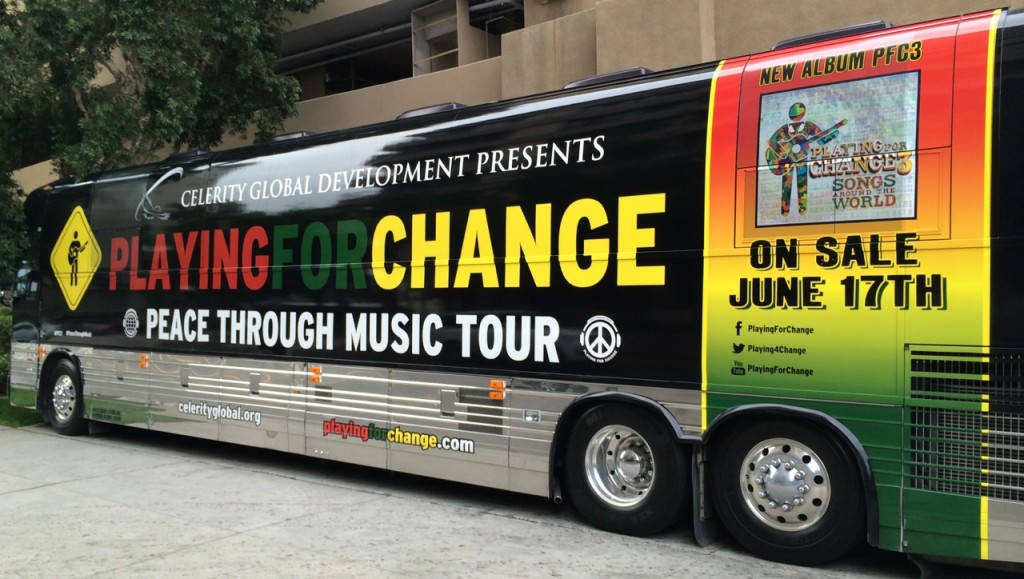 Playing For Change is a movement created to inspire and connect the world through music.

The idea for this project came from a common belief that music has the power to break down boundaries and overcome distances between people.

Playing For Change was born in 2002 as a shared vision between co-founders, Mark Johnson and Whitney Kroenke, to hit the streets of America with a mobile recording studio and cameras in search of inspiration and the heartbeat of the people. This musical journey resulted in the award-winning documentary, “A Cinematic Discovery of Street Musicians.”

In 2005, Mark Johnson was walking in Santa Monica, California, when he heard the voice of Roger Ridley singing “Stand By Me.” Roger had so much soul and conviction in his voice, and Mark approached him about performing “Stand By Me” as a Song Around the World. Roger agreed, and when Mark returned with recording equipment and cameras he asked Roger, “With a voice like yours, why are you singing on the streets?” Roger replied, “Man I’m in the Joy business, I come out to be with the people.” Ever since that day, the Playing For Change crew has traveled the world recording and filming musicians, creating Songs Around the World, and building a global family.

Creating Songs Around the World inspired us to unite many of the greatest musicians we met throughout our journey in the creation of the Playing For Change Band. These musicians come from many different countries and cultures, but through music, they speak the same language. The PFC Band is now touring the world and spreading the message of love and hope to audiences everywhere.

The true measure of any movement is what it gives back to the people. We created the Playing For Change Foundation, a 501(c)3 nonprofit organization dedicated to building music and art schools for children around the world, and creating hope and inspiration for the future of our planet.

No matter who you are or where you come from, we are all united through music.

Support this movement by becoming a Member of the Playing For Change Family and together we will make the world a better place.