No one can forget a face with a zorro-like mask. That face is of the fun facts about raccoons you’d know well.

Everyone knows that raccoons are creatures which are somewhat of a nuisance and scour through garbage. Fewer would be aware of the fun facts about raccoons we are about to introduce.

You’re probably aware that the raccoon, or coon, is a North American native and is part of a group of animals called procyonids. One of its distinguishing traits is the dense, gray undercoat that keeps it warm during the winter months.

You can also tell it apart from other animals because of its zorro-like facial mask and its agile front paws. As the largest member of the procyonid family, it measures between 40 to 70 cm and weighs about 26kg. Raccoons are highly intelligent animals which can remember solutions to tasks for about three years.

Like dogs and cats, they are omnivorous animals which eat plants and animals. Raccoons thrive in deciduous forests. These creatures have extended their habitats to include mountainous areas and coastal marshlands.

The little thieves do well in an urban landscape too, so you may recall being extremely put off when you found one raiding your trash. Because of purposeful breeding in the 20th century, you will find them as far as Japan.

Raccoons have gender-specific social norms just as we do. While females gather in communal areas, males group in fours to strengthen their positions against unknown males. Females give birth after a pregnancy term of about 65 days.

So, raccoons are primarily wild animals, but people can domesticate them with the appropriate care.

The Racoon Temperament and Traits 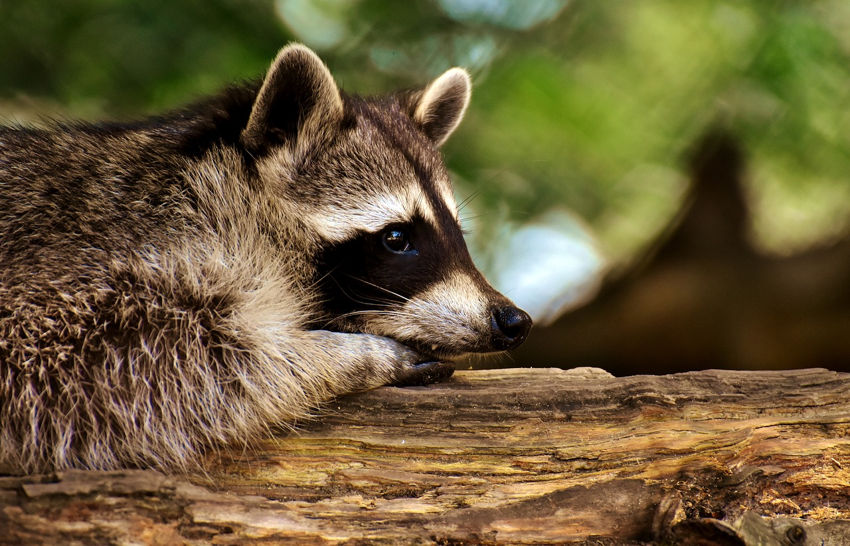 A raccoon isn’t an intimidating creature and shouldn’t be unsettling. It coexists, albeit sometimes uncomfortably, with humans. We can increase our acceptance of it if we understand it. The raccoon temperament is among the most fun facts about it.

Raccoons are far from being shy. People seldom faze them so that they can become quite daring. But no matter how brave they are, they still fear you, so they will stand still and stare at you if you confront them. If the raccoons on your street are particularly cheeky and keep raiding your trash, it could be that one of your neighbors is feeding them.

If you have an encounter with one of these daring masked invaders clap and step towards it. It should run away quickly. Use an air horn, a hose or throw tennis balls at it if you need to tell it how scary you are. Even if it has been getting food from your neighbors, being loud should frighten it.

Contact a local wildlife administrator if it doesn’t respond, as there could be other issues.

Raccoons seldom attack humans, but will sometimes “threaten” them by grunting or growling. If they do, they are only trying to scare you enough to get you to leave them be.

Should you meet an ‘aggressive’ raccoon, pretend to back away a little. Doing this allows it to run away from you. Once it does, clap your hands or yell loudly to remind it that you are a predator.

Raccoons aren’t particularly friendly. These nocturnal mammals scavenge for food at night and sleep during the day. They don’t hibernate but relax quite a bit, living off stored fat during the process. As a result, they lose about 50% of their body weight during this time.

These animals are clean creatures which wash their food and even dig latrines.

Mothers wean their babies after 7 to 16 weeks. Young raccoons start to wander from their mothers after about 12 weeks. They can live for about three years in the wild.

8 Fun Facts about Raccoons That Will Make You Smile 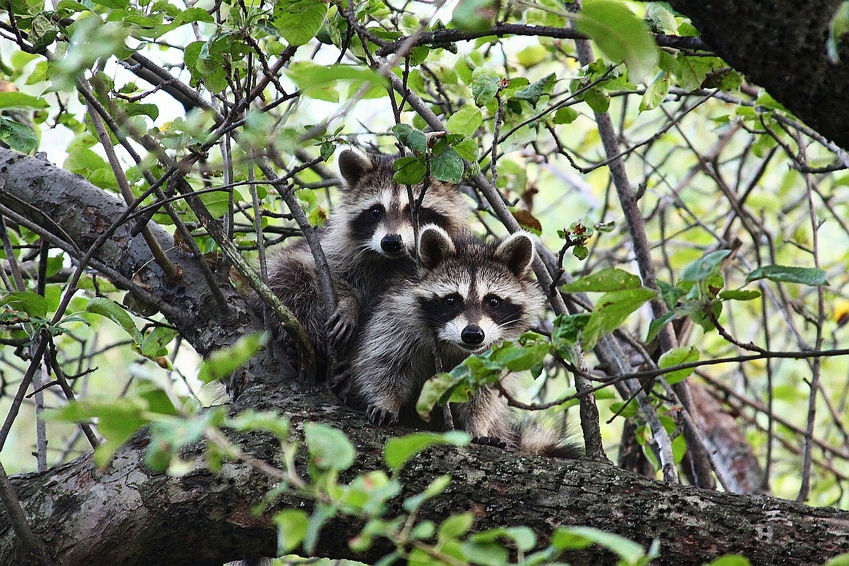 So, raccoons are too common, and the facts above are probably familiar to you. But here are a few fun ones about them that will bring a smile to your face.

1. The raccoon gets its name because of its hands

One of the fun facts about raccoons is its other name – the bandit. If you’ve had your kitchen or garage broken into by one, you’d know that the name suits it to a T. Blame its lightning-fast hands for being able to conduct destructive raids.

Among the fun raccoon facts is that have five times as many sensory cells in their hands than other creatures, including ourselves. They perceive objects because they construct images of them through touch.

2. There are many types of raccoons

Others inhabit tropical islands away from the US mainland.

The quick hands of a raccoon aren’t the only reasons why people dub it a thief. The quaint, yet unusual black markings on its eyes make it look like a trickster. Of course, cartoons and comics have characterized it as a charming outlaw.

The black mask isn’t there to give this creature an air of mystery or thievery. It reduces incoming light and glare, which would restrict its vision otherwise. One reason it is nocturnal is that the peripheral view available at night allows them to detect contrast in the objects they see.

4. A famous raccoon was a presidential pet

Perhaps one of the most fun facts about raccoons is that even world leaders have found them adorable. A somewhat famous raccoon was Rebecca, a pet which lived with President Calvin Coolidge for part of his term. People had them for dinner during that time.

President Coolidge saw this creature’s merits, however, and made it a part of his family. It soon received an engraved collar and accompanied him wherever he went in the White House. Coolidge was eccentric indeed – his pets included a donkey, a bobcat, a wallaby, and a goose. Rebecca had found her family.

5. You will find them all over the world

The first raccoons were exported to Europe in the 1920s to stock fur farms. The Europeans first imported Raccoons for their fur. Thankfully for these mischievous yet adorable creatures, an unintentional bombing triggered by farmers allowed them to escape and replenish their numbers in the wild.

And so, the raccoon traveled to Japan, where it became the unexpected star of a children’s anime series. Japan imported about 1500 of them at one time. Many returned to the wild when their care became burdensome for their families. Japan has since banned raccoon imports.

6. They are surprisingly resilient and adaptable creatures

Researchers have toured the raccoon’s natural habitat for years and discovered that the creature isn’t becoming extinct – instead, it’s adapting. Urban raccoons seem to be faring better than their rural cousins.

City dwellers may notice that the raccoons which live among them are particularly cunning. That’s because they’ve to overcome human-made obstacles. Many have learned how to avoid cars and intersections and solve challenging problems.

7. A raccoon is a smart fellow

The raccoon is intelligent. Scientists challenged a few of these creatures with the Aesop’s Fable test. If you’re familiar with the story, you’ll know that the protagonist is a crow that drops stones in a pitcher to raise the water level in it.

Researchers have adopted it as a standard for animal intelligence. They put a few raccoons in a room with a cylinder of water with marshmallows in it. The raccoons had to find a way to increase the water level to reach the snacks, which two of them did after the researchers showed them what to do.

One was unusually bright and toppled the cylinder over.

Animals, including ourselves, learn by imitating their mothers. One raccoon learned how to climb a tree with its mother’s help. It’s climbing skills guarantee its survival in dense forests.

We hope that these fun facts about raccoons have gotten your attention. The next time you spot one, remember that it a wild creature that gets in your hair or food.

20 Endangered Species in the World That May Soon Become Extinct

These 30 Countries Contribute The Most Good To The World