Climate change. Global warming. The effects of overpopulation are real, and they need our attention.

What causes them, and why are they such a concern? More importantly, how do we manage the effects of overpopulation? We answer these questions in this article.

The Causes of Overpopulation

The causes of overpopulation are apparent but not easy to address. These are a few reasons for the population booms in countries.

First of all, many experts cite poverty as the top cause of overpopulation. A lack of education and high birth rates lead to massive population booms, particularly in developing countries. The United Nations predicts that the world’s population will reach 9.8 billion by 2050.

2. Poor Use of Contraceptives

Unexpected pregnancies, often a result of poor planning, leads to overpopulation. This trend is prevalent in developing countries. The NHS warns that no contraceptive is 100% efficient, and is even less so when misused.

Child Labor is an indirect, but predominant cause of overpopulation. UNICEF estimates that about 150 million children hold jobs, particularly in countries with poorly enforced labor laws. Many don’t have access to education, especially on birth control.

Death rates have lowered because of advancements in medical technology. Dangerous viruses such as smallpox, tuberculosis, and polio are almost non-existent in developed countries.

This statistic is, of course, positive. However, it means longer lifespans. According to this study, reduced mortality leads to overpopulation.

Invitro Fertilization (IVF), which involves combining an egg, or ovum with a sperm outside the body, has led to higher fertility rates than before. Most women can now have children.

The argument against overpopulation

There is some argument that overpopulation is just a myth. Experts comment on food shortage, saying that the Earth produces enough food to feed 10 million people. The Earth’s population stands at roughly 7 billion people at present.

They claim that we will not be short of food because we consume higher energy, more cost-friendly foods than before. They argue further that large populations mean more opportunities for scientific innovation.

Moreover, they comment that people need less freshwater than before. They maintain that the use of freshwater has increased sevenfold in comparison with freshwater withdrawals, which have increased fourfold.

Their final claim is that the world’s population is declining; it will only grow at a rate of 0.77% by 2050.

9 Real Effects of Overpopulation on the Environment

However, other statistics prove otherwise. The effects of overpopulation are too apparent to ignore.

A population that’s too high may be harmful to a country and its economy. Massive population growth can prove problematic. Here’s why.

First of all, overpopulation can lead to many health issues. An increase of people in places of residence can cause infections to spread. Stanford University describes how it can have a negative impact on public health.

The number of positions available in companies is always limited. Overpopulation makes job creation difficult. The Asian Forum News published a report that the labor supply in overpopulated nations may be too large to meet demand.

Another of the effects of overpopulation is poverty. Overpopulated countries tend to have more poverty zones than underpopulated ones.

Moreover, criminal activities will increase. Police forces find it difficult to maintain law and order when the population rate is too high. The presence of other factors that cause overpopulation, such as unemployment, will prompt lawlessness.

Furthermore, population growth increases the possibility of anonymity, according to this report published in the Journal of Criminology.

The governments of overpopulated countries have to provide educational resources for their people. Intense competition causes intelligent and talented people to miss out on opportunities. These people move to other countries to seek them.

Overpopulation leads to the lack of natural resources, according to Arts and Sciences Professor Robert Criss of the Washington University in St. Louis.

He reveals that the United States is experiencing population growth at a faster rate than any other developed country. He stresses that this leads to a lack of resources like groundwater. Consequently, there is a decrease in water in some places and saltwater intrusion in others, significantly reducing drinking water.

Furthermore, human activity leads to increased waste and unsanitary conditions. More travel, more vehicles and the release of sewage water cause our environment to become polluted.

Countries should comprise at least 30% forest. Unfortunately, governments cut trees down to meet the demands of large populations. Deforestation destroys the natural habitats of wild animals. 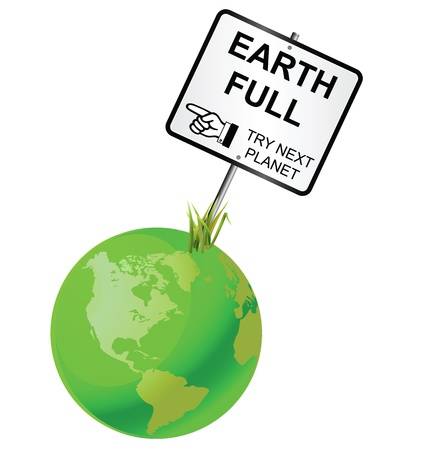 It’s apparent that governments need to deal with the consequences of overpopulation. There are simple, yet creative solutions.

First of all, knowledge is one of the keys to solving the problem of massive population growth. Proactive governments can empower women. Education will give them knowledge about birth control and family planning. The United Nations intends to deal with this issue.

Indeed, education has a significant part to play in curbing overpopulation. Governments can make it creative and fun. The US-based Population Media Center has created soap operas that deal with the issue. These have reached 500 million people in 50 different countries.

Alternatively, they can launch worldwide multimedia campaigns. Governments can also do their part by promoting adoption. The process is ideal for childless couples and anyone who is concerned about excess population growth.

Also, society can do its small part by not judging couples who choose not to have children. They have made a lifestyle choice that will help to solve the problem of overpopulation.

Overcrowding in some countries has compromised their national security. Massive population growth has led to unemployment, poverty, and therefore, lawlessness. Making it a national security issue can make people keenly aware of the problem.

Governments that wish to manage their populations can provide incentives to families with one or two children. Couples will be more receptive to family planning if they don’t have financial worries.

Large businesses, which often have their headquarters in big cities, draw many potential employees. Moving them out will redistribute the population to less crowded areas.

In all, the effects of overpopulation are severe, but it’s not too late to manage them. Creative solutions and effort are needed.

5 Types of Cat Personality: Which One Is Your Cat?