It appears things change more than we think – way more, and in more ways. Even when we’re aware of the underlying reality of constant change, we reference new changes by our memory and perception of old changes.

And those were based on previous reference points. We seem to often judge change by points of previous attachment, even though they continually shift. That cannot be very accurate no matter how real they were at the time. Things have shifted. And will continue to do so.

While assessing a particular situation, as my mind wandered backward to find context, I was surprised to realize how strongly and easily I was able to reference my previous “points of view”. It jolted me knowing I’m not that person anymore yet it was so easily available in my consciousness.

But that’s how the mind is wired. A lot of information is stored there awaiting activation depending on our perspective and awareness. Hence we often have to wade through a mire of influences whether we want to or not.

And some of these are trauma based triggering mechanisms to steer our thinking and control our actions. A subject we need to be aware of.

Everything’s shifting. In shifting ways, and in a shifting perception of change. It’s an upwardly sliding crescendo of realization if we allow ourselves to pursue it. In the above instance, what I was comparing to was a sort of emotional imprint.

I was looking back at different periods of time in my life in comparison to what I’m going through now, consciously conjuring up old impressions in contrast with current experience. This isn’t my usual pattern as I see it, but this particular instance brought this patterned behavior programming to light.

I found myself doing this for whatever reason. Understanding, nostalgia, encouragement, comparison. There’s so much that flows through our minds as we seek meaning and definition.

But it really struck me. I realized how I often use old imprints to gauge comparative changes despite knowing they’re fundamental of no real relevance. Not necessarily bad in itself as there’s no doubt something to learn from experience, but I shouldn’t compare to times in my life when I was relatively unconscious. There is virtually no basis in comparative reality once we’ve woken up to true conscious awareness, except perhaps for historical context and to learn from it. But this is all part of the process.

Being aware of these very relative relationships to ongoing change is essential. Once we’re centered in conscious reality we can observe from a non-reactive viewpoint, thus keeping us from yielding to the lower level reactive mind.

These current vibrational changes we’re experiencing are completely new, as are each of us by the day. However, recalling old imprints can subtly reinforce our sense of attachment to those previous limiting perspectives. Looking in relation to an old perceived set point will only let us see so far. It’s beyond even comparing apples to oranges when it comes to perception shifts. They just don’t compare as it’s a type of dimensional difference.

That’s why letting go or detaching, is so important. Changing our surroundings can greatly aid this process, as well as jettisoning objects and other influences that “remind” us of those limiting emotional patterns. The less programming we’re exposed to the better.

It’s not easy as they work on our subconscious level by information and sensory overload including a relentless bombardment of encoded information via advertising, logos, trigger phrases, and even number sequences. What we can’t process gets dumped into the subconscious and sits there awaiting activation.

Very seditious stuff. The solution is to turn it all off and get as far away from it as possible, another good reason to at least get out of cities and avoid the mass media like the plague because it is.

Another analogy might be a rock climber who won’t fully let go of his gear attached to the lower rungs he made his ascent. He’ll only get so far. As you go higher your perspective shifts phenomenally, but he won’t get to those really inspiring views if he won’t let go of those lower footholds that got him started. 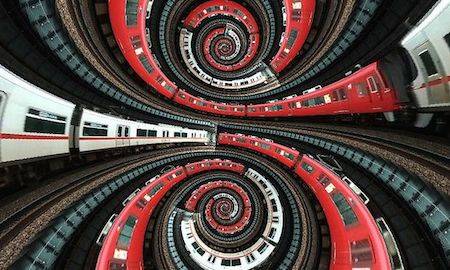 These memory reference points are psychically embedded in emotions and memory clusters. It’s very similar to the crystalline knots a massage therapist works out of muscle tissue that they have to be flushed from the system.

Memory can be an anchor as well as a guide.

It’s all good if we let this shifting false reality pass and we have solid anchors in true conscious awareness and true knowledge. That’s the true shift available to all that we need to take advantage of. However, a lot of people are fighting these changes, consciously and subconsciously.

We know for a fact that these major shifts are underway in many forms, most profoundly in the awakening we’re witnessing. Even on a surface level, that society is moving so rapidly towards a totalitarian dystopia is completely evident. An example of shifting on this plane is how science and technology are “advancing” at an exponential rate.

Unfortunately, in the current paradigm of the matricized world, it’s not being used for humanity’s benefit, but for its reduction and Machiavellian control.

One huge pitfall is that as we get further into this gargantuan trap our focus tends to get fixated on the dark details and less on maintaining our conscious awareness. That’s when blinding reactive mechanisms start to kick in. A dangerous reinforcing feedback loop that leads to nowhere which is played upon by this deftly imposed matrix of deceit.

The major media are masters of this, as well as some in the alternative media. You can tell by what it engenders in your heart – are we feeling empowered and more liberated, or does it reinforce the very elements we’re rejecting, using anger and fear?

Do you come away dwelling on and thus reinforcing all the ugliness going on in an endless cycle that only brings a sense of futility, or is the information presented in an empowering way?

The danger we need to be aware of is to not help bring their intended reality into existence via our attention and intention. Know what’s going on but don’t feed into it.

One symptom of being in this feedback loop of trauma-based fear stimulation besides undue anger and frustration is simple confusion. When life seems to be in disarray and we’re put on the defensive, a major tactic for human control, left-brained fear, and survival modes start to take control as well as whatever else has been triggered.

That’s why it’s important to remember what we knew in the light as the times of darkness fall. It’s also why we should act in the light while we can still see clearly.

Now Is Always the Time

To delay is as good as to deny. Letting the house fall down around our ears and those of our loved ones while feverishly pointing to its problems is next to a subhuman reaction – too little, too late and too unconscious. Ours is to respond consciously and now.

Activate and respond consciously – don’t get caught staring hypnotically into the metastasizing morass of fabricated wickedness. It’s coming at you. It’s time to act. Either do something to change the situation or move out of its way – or better yet, both!

What conscious behavior inevitably calls for is a lifestyle shift. That’s what grabs stubborn souls by the throat. If someone doesn’t budge and they keep refusing to acknowledge the evident truths of the reality around them and respond to those truths by consciously making the needed changes in their lives, it can be pretty tough.

As well as very confusing and personally weakening. And it will only get tougher. These changes include continually disengaging from the system, letting go of unfruitful and hindering relationships, adopting a healthier lifestyle both physically and mentally, and preparing spiritually and practically for the increasing economic, social and spiritual storms coming our way.

And most of all staying proactive, lovingly sharing empowering information with others and participating in localized alternative solutions.

The spiritual is always supreme. Times like these can be wonderful opportunities, although harrowing for many. We can either choose to let go of the temporal and live an awakened and activated life, or we can clutch our old ways and stuff all the tighter as the storm picks up.

It’s much easier to let go now by choice and move into a new paradigm than it is to be forced into one and have your attachments of all sorts ripped away from you. At that point, our reactive mind kicks in and that is the definition of spiritual limitation. That’s how they run the system, keeping humanity on the defensive, and they will continue to turn up this onslaught until their whole machine blows up.

There’s really no reason not to disengage from the matrix. Just begin in stages. Those imaginary handcuffs of the mind are weaker than cooked spaghetti. It’s the habitual fear programming that keeps people from doing the obvious. That’s the design, to paralyze humanity.

The awakening cannot be thwarted, but individuals can be seriously hindered, mostly by living in virtual denial. We can’t say we understand what’s going on and not respond to the call to not only stop participating with and supporting this machine, but most of all helping to change things, beginning with ourselves.

More often than not ours is to simply defy the system programming…disobey, disconnect and disengage from anything they throw at us.

And don’t worry, change will continue to happen no matter what. Just remember, you are the conscious observer, not the reactive self.

Don’t get caught in the action-reaction loop. It leads to nowhere, no matter the truth of the information. It can be more damaging than helpful if you get stuck in that system and dwell on railing against the machine. The point is to get out and away from all of those influences and operate from an enlightened viewpoint.

Make the break and stay free. Watch what you think, read, see or submit to, consciously or subconsciously. Anything can be misleading.

Stay informed, but there’s plenty of good and empowering information to dwell on rather than falling for their enticement to engage in their vampiric game.

*This article was originally published at zengardner.com