There were many theories aimed to describe and explain child development, but let’s first focus on its definition. Child development entails the biological, psychological and emotional changes that occur in human beings between birth and the conclusion of adolescence, as the individual progresses from dependency to increasing autonomy.

It is a continuous process with a predictable sequence, yet having a unique course for every child. It does not progress at the same rate and each stage is affected by the preceding developmental experiences. Because these developmental changes may be strongly influenced by genetic factors and events during prenatal life, genetics and prenatal development are usually included as part of the study of child development.

How are the child development stages defined?

There are various definitions of periods in a child’s development since each period is a continuum with individual differences regarding start and ending. Some age-related development periods and examples of defined intervals are:

Increased research and interest in this field have resulted in new theories and strategies, with specific regard to practice that promotes child development within the school system.

There are also some theories that seek to describe a sequence of states that compose child development. 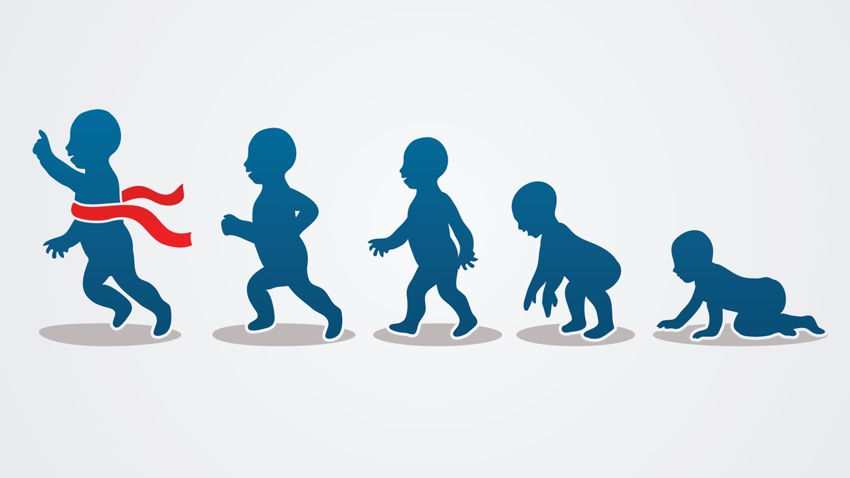 The four systems are microsystem, mesosystem, exosystem, and macrosystem. Each system contains roles, norms, and rules that can powerfully shape development. Since its publication in 1979, Bronfenbrenner’s major statement of this theory, The Ecology of Human Development has had widespread influence on the way psychologists and others approach the study of human beings and their environments.

As a result of this influential conceptualization of development, these environments — from the family to economic and political structures — have come to be viewed as part of the life course from childhood through adulthood.

Jean Piaget was a Swiss scholar who began his studies in intellectual development in the 1920s. Piaget’s first interests were those that dealt with the ways in which animals adapt to their environments and his first scientific article about this subject was published when he was 10 years old.

This eventually led him to pursue a Ph.D. in Zoology, which then led him to his second interest in epistemology. Epistemology branches off from philosophy and deals with the origin of knowledge. Piaget believed the origin of knowledge came from Psychology, so he traveled to Paris and began working on the first “standardized intelligence test” at Alfred Binet laboratories; this influenced his career greatly.

As he carried out this intelligence testing he began developing a profound interest in the way children’s intellectualism works. As a result, he developed his own laboratory and spent years recording children’s intellectual growth and attempted to find out how children develop through various stages of thinking.

Piaget concluded that adaption to an environment (behaviour) is managed through schemes and adaption occurs through assimilation and accommodation.

Sensorimotor: (birth to about age 2)

This is the first stage in Piaget’s theory, where infants have the following basic senses: vision, hearing, and motor skills. In this stage, knowledge of the world is limited but is constantly developing due to the child’s experiences and interactions.

According to Piaget, when an infant reaches about 7–9 months of age they begin to develop what he called object permanence, this means the child now has the ability to understand that objects keep existing even when they cannot be seen.

An example of this would be hiding the child’s favorite toy under a blanket, although the child cannot physically see it they still know to look under the blanket.

Preoperational: (begins about the time the child starts to talk, about age 2)

During this stage of development, young children begin analyzing their environment using mental symbols. These symbols often include words and images and the child will begin to apply these various symbols in their everyday lives as they come across different objects, events, and situations.

However, Piaget’s main focus on this stage and the reason why he named it “preoperational” is because children at this point are not able to apply specific cognitive operations, such as mental math. In addition to symbolism, children start to engage in pretend play in which they pretend to be people they are not (teachers, superheroes).

In addition, they sometimes use different props to make this pretend to play more real. Some deficiencies in this stage of development are that children who are about 3–4 years old often display what is called egocentrism, which means the child is not able to see someone else’s point of view, they feel as if every other person is experiencing the same events and feelings that they are experiencing.

However, at about 7, thought processes of children are no longer egocentric and are more intuitive, meaning they now think about the way something looks instead of rational thinking.

During this stage, children between the age of 7 and 11 use appropriate logic to develop cognitive operations and begin applying this new thinking to different events they may encounter. Children in this stage incorporate inductive reasoning, which involves drawing conclusions from other observations in order to make a generalization.

Unlike the preoperational stage, children can now change and rearrange mental images and symbols to form a logical thought, an example of this is reversibility in which the child now has the ability to reverse an action just by doing the opposite.

The final stage of Piaget’s cognitive development defines a child as now having the ability to “think more rationally and systematically about abstract concepts and hypothetical events”. Some positive aspects during this time is that child or adolescent begins forming their identity and begin understanding why people behave the way they behave.

A personal fable is when the adolescent feels that he or she is a unique person and everything they do is unique. They feel as if they are the only ones that have ever experienced what they are experiencing and that they are invincible and nothing bad will happen to them, it will only happen to others.

Vygotsky was a Russian theorist, who proposed the sociocultural theory. During the 1920s–1930s while Piaget was developing his own theory, Vygotsky was an active scholar and at that time his theory was said to be “recent” because it was translated out of Russian language and began influencing Western thinking.

He posited that children learn through hands-on experience, as Piaget suggested. However, unlike Piaget, he claimed that timely and sensitive intervention by adults when a child is on the edge of learning a new task (called the zone of proximal development) could help children learn new tasks.

This technique is called “scaffolding,” because it builds upon knowledge children already have with new knowledge that adults can help the child learn. An example of this might be when a parent “helps” an infant clap or roll her hands to the pat-a-cake rhyme until she can clap and roll her hands herself.

Vygotsky was strongly focused on the role of culture in determining the child’s pattern of development. He argued that,

“Every function in the child’s cultural development appears twice: first, on the social level, and later, on the individual level; first, between people (interpsychological) and then inside the child (intrapsychological). This applies equally to voluntary attention, to logical memory, and to the formation of concepts. All the higher functions originate as actual relationships between individuals.“

Vygotsky felt that development was a process and saw periods of crisis in child development during which there was a qualitative transformation in the child’s mental functioning.

Attachment theory, originating in the work of John Bowlby and developed by Mary Ainsworth, is a psychological, evolutionary and ethological theory that provides a descriptive and explanatory framework for understanding interpersonal relationships between human beings.

Bowlby’s observations of close attachments led him to believe that close emotional bonds or “attachments” between an infant and their primary caregiver are an important requirement that is necessary to form “normal social and emotional development”.

Erikson, a follower of Freud’s, synthesized both Freud’s theories of child development and his own theories to create what is known as the “psychosocial” stages of human development. They span from birth to death and focuses on “tasks” at each stage that must be accomplished to successfully navigate life’s challenges.

John B. Watson’s behaviorism theory forms the foundation of the behavioral model of development in 1925. Watson was able to explain the aspects of human psychology through the process of classical conditioning. With this process, Watson believed that all individual differences in behavior were due to different learning experiences.

He wrote extensively on child development and conducted research (see Little Albert experiment). This experiment had shown that phobia could be created by classical conditioning. Watson was instrumental in the modification of William James’ stream of consciousness approach to construct a stream of behavior theory.

Skinner used the operant chamber, or Skinner box, to observe the behavior of small organisms in a controlled situation and proved that organisms’ behaviors are influenced by the environment. Furthermore, he used reinforcement and punishment to shape the desired behavior.

Other theories regarding child development

In accordance with his view that the sexual drive is a basic human motivation, Sigmund Freud developed a psychosexual theory of human development from infancy onward, divided into five stages. Each stage centered around the gratification of the libido within a particular area, or erogenous zone, of the body.

He also argued that as humans develop, they become fixated on different and specific objects through their stages of development. Each stage contains conflict which requires resolution to enable the child to develop.

The use of dynamical systems theory as a framework for the consideration of development began in the early 1990s and has continued into the present century. Dynamic systems theory stresses nonlinear connections (e.g., between earlier and later social assertiveness) and the capacity of a system to reorganize as a phase shift that is stage-like in nature.

Another useful concept for developmentalists is the attractor state, a condition (such as teething or stranger anxiety) that helps to determine apparently unrelated behaviors as well as related ones. Dynamic systems theory has been applied extensively to the study of motor development; the theory also has strong associations with some of Bowlby’s views about attachment systems.

Dynamic systems theory also relates to the concept of the transactional process, a mutually interactive process in which children and parents simultaneously influence each other, producing a developmental change in both over time.

The “core knowledge perspective” is an evolutionary theory in child development that proposes “infants begin life with innate, special-purpose knowledge systems referred to as core domains of thought” There are five core domains of thought, each of which is crucial for survival, which simultaneously prepares us to develop key aspects of early cognition; they are: physical, numerical, linguistic, psychological, and biological.

*This article uses material from the Wikipedia article “Child development“, which is released under the Creative Commons Attribution-ShareAlike License 3.0 (view authors).

4 Thought Patterns That Hinder Your Relationship

8 Weird Ways a Man and a Woman Perceive Life Differently, Backed by Science