Climate change is happening and affects us in more ways than we may realize. We need to know about the different types of pollution.

It isn’t just land, water, or air that we pollute. We clutter the Earth in many ways, and the mess takes a toll on our mental and physical health. Life Advancer introduces each type of pollution and suggests how we can do our part to reduce it.

Information about plastic bottles clogging our waterways, creating garbage patches in our oceans, and endangering marine life is not new. Water pollution is familiar. You also probably know how air and land pollution take place.

But you might not be aware that we contribute to other types of pollution. Life Advancer introduces them here.

First of all is Soil Pollution, which you may know as Land Pollution. Many people attribute it to non-sustainable farming and dangerous waste seeping into the soil. It can result in the poisoning of groundwater and land. The toxicity disrupts the growth of natural life.

We are all too familiar with blaring car horns, screaming neighbors, and television sets turned on too loudly. We refer to Noise Pollution as any noise that interferes with human activity. Concerts, subway trains, and fireworks all interrupt routines.

If left alone, it may cause permanent hearing loss and disturb ecosystems. A 2007 article in the Washington Post suggests that over 100 million Americans listen to noises of over 55 decibels. Excess noise disrupts sleep, triggers irritation, and may cause cognitive impairment.

Radioactive Pollution is, by far, the most dangerous type of contamination. Its effects are far-reaching and can result in death. The incidents of radioactive pollution have risen since the 20th century, with the invention of atomic bombs.

It causes congenital disabilities and cancer. Research highlights the importance of communicating the real environmental consequences of pollution to the public.

Light Pollution refers to the over-illumination of places. Too much light can be obtrusive and distracting. According to this research, it has adverse health effects, such an association with sleep disorders and even cancer. Light Pollution occurs in large lighted cities, where there are large neon billboards and nighttime entertainment.

This form of pollution occurs when the temperature in a particular area increases over time. Scientists attribute it to the release of carbon gases into the air. Changes in temperature, resulting in climate change and the loss of wildlife.

Visual Pollution makes the surroundings visually unappealing. It occurs when obstructions to views clutter the environment. It may not pose an immediate risk to our health, but can have effects nonetheless, such as stress.

How aesthetically pleasing a city or town is influences its economic development, according to research. Researchers involved in this study also found that it causes tiredness, unproductivity, inattention, and irritability over time.

The different types of pollution form a network, with many links. They are interrelated. For example, light pollution happens because of the burning of fossil fuels. It, in turn, increases water, air, and land pollution.

Innovative Inventions That Could Help the Pollution Issues

We bury toxins underground, dump them in forests, or throw them out at sea. No matter how remote a place is, it probably has toxic waste. Scientists have come up with innovative technologies to reverse the damage.

First of all, our chlorinated waste, which you’ll find in groundwater and dry-cleaning fluid, can cause liver problems or cancer. Some bacteria find toxic waste palatable. They feed on chlorinated compounds and turn them into gases.

Coal plants in the United States spew out radioactive waste called fly ash as they generate electricity. Radioactive waste, of course, is toxic to the environment. A company in Missouri, however, has managed to turn this ash into bricks. These soak up the mercury from the air.

Rot Fungi, which you can find in American forests, use enzymes to convert the carbon in trees into energy. These enzymes also oxidize pollutants in the environment, making the atmosphere safe.

No one takes kindly to the idea of stinking human wastewater, but we can use it to render mental toxins impotent. The iron in it, when combined with cadmium, lead, or arsenic, reacts quickly with other metals and stops them from polluting nearby groundwater.

The final item on this list is Hematite, which manufacturers sometimes use to make jewelry. They grow into pyramid like-structures when placed in acid. Contaminants settle into the tiny pockets in them as they form, and they stay stable for many years.

Ways to Manage the Different Types of Pollution 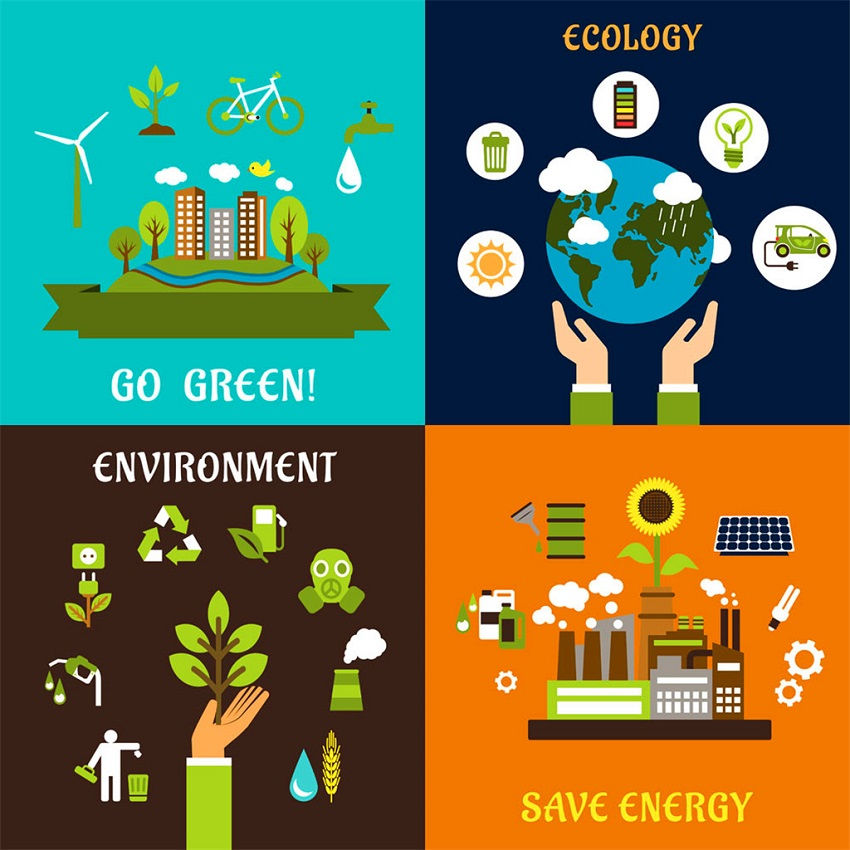 We can do our part to stop pollution from ruining the Earth and our lives. Adopting sensible lifestyle habits is critical.

1. How to Prevent Land Pollution

a. Use Biodegradable Plastics

Walk along any pavement, and you will see litter lining it. Plastics are the most deceptive and damaging things we throw. Plastics don’t break down quickly. Many float down our waterways, into rivers, and eventually the ocean. They form garbage patches the size of small islands.

b. Turning Waste Matter Into Fuel

Styrofoam, like other plastics, isn’t biodegradable. Items like snack packaging and disposable cups go to landfills. Students from a Folsom high school found a way to convert it into energy. They invented a device capable of digesting styrofoam and turning it into biodegradable plastic.

Called a Polystyrenator, it can turn waste into treasure. Inventions like this can help human beings make the transition from using non-biodegradable materials into biodegradable ones.

Not all of us can invent devices that eat nasty microbes. However, we can reduce our disposable waste. We can do so by limiting the packaging we purchase. For example, we can carry canvas shopping bags instead of relying on the plastic ones that stores provide. It helps us bring down production pollution.

We rely on water to live, so it’s vital to limit water contaminants. Here are a few ways to do so.

a. By Planting Trees in Urban Areas

Planting trees can keep the water clean. Along with other vegetation, they can stop rainwater from transferring harmful pollutants like fertilizers and oil into water sources. Plants can absorb nutrients in the process, and make for a healthy environment.

Also, think about what you dump down drains. Avoid disposing of oil and other chemicals down the sink. Furthermore, many people use drain-cleaning products from DIY stores to clear clogged drains. These contain harmful chemicals. Pouring hot water down the drain works as well as they do.

Unhealthy air is hazardous to our health. There is a lot of it, particularly in industrialized countries. It’s in our interest to keep our air clean.

a. Use sustainable energy

b. Converting Air Pollutants into Materials

We can turn harmful emissions into tangible objects. For example, Chinese and Dutch inventors can turn it into bricks and energy. An Indian innovator has found a way to turn them into printer ink.

In all, we can’t prevent the burning of fossil fuels, but we can stop these types of pollution from harming the environment. It takes some effort and common sense.