The body needs food, we all know that, but what kind of food is best? Conventional foods are what we’re used to eating, well, a high percentage of us.

The problem is, these foods are questionable for many reasons. When I speak of conventional foods, I refer to consumables purchased from establishments such as restaurants and grocery stores. Even some home-grown foods have the same characteristics as the store-bought ones.

So what happens to your body when you replace the products of conventional farming with organic foods? Read on to find out!

We know what happens when we eat conventional foods, right?

Conventional foods, for the most part, contain pesticides. Pesticides are used to control all sorts of pests that invade gardens and fields. Without pesticides, it’s much harder to control garden invaders, thus retaining healthy fruits and vegetables.

Conventional foods are grown where pests are actively being controlled with, let’s face it, toxins! We know that pesticides are unhealthy to the environment, but does it affect the health of the individual?

Most pesticides are tested to ensure they do not cause harm to any other species except what they are designed to control. However, things seem to slip through the cracks, a pesticide that might not harm one person could cause great harm to another.

This is the reason so many are switching from conventional foods to organically grown only produce.

The Organic Effect – only organic foods for two weeks

Coop, a Swedish Supermarket Chain, presented a program called the Organic Effect. With this study, a family of five were asked to relinquish all their conventional foods in exchange for an organic diet for two weeks.

The family agreed, thinking this would be a great opportunity to see the effects of a change in food consumption. Before the change in foods, the family was asked to provide a urine sample to test for saturation of pesticides. Test results reveal the family had a large number of pesticides inside their bodies.

The family was horrified. They were ready to have every food product in their homes replaced with organic substitutions. 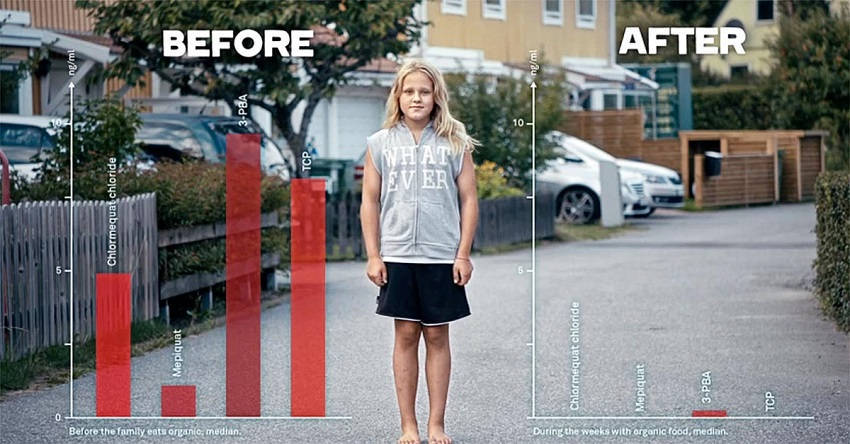 After the two week change, another urine sample was collected. Almost all traces of pesticides were gone! These results were published in The Human Exposure to Pesticides from Food.

Although little is known about the long-term effects of the body on pesticides, there is conclusive evidence that, when combined, some pesticides can cause serious damage. The family agrees, however, that they want to keep the pesticides from their bodies from now on. I agree!

About the Author: Sherrie Hurd

Sherrie Hurd is a professional writer and artist with over 10 years of experience. She is an advocate for mental health awareness and nutrition. Sherrie studied Psychology, Journalism, and Fine Arts, receiving an Associates in Marketing. She has written for Beacon, a southern college publication, and is an author of a full-length non-fiction novel. Sherrie spends most of her time giving life to the renegade thoughts. As the words erupt and form new life, she knows that she is yet again free from the nagging persistence of her muse.