Again, we see the wealth of the world reap privilege, it seems. Residents of Sao Paulo, 15 thousand men, and women to be exact, protested for their own rights to these privileges in March 2015. The things sought after the most were access to simple water.

Dressed in MTST (Worker’s Homeless Movement)’s t-shirts, together with left-wing organizations, the underprivileged protested for the right to consume healthy amounts of water. What we often take for granted in other countries is much more valuable in Sao Paulo and neighboring regions.

Water is rationed here, taking away hydration between the hours of 1 p.m. and 7 in the morning. If water wasn’t collected, this meant hours of going without. This just wouldn’t work anymore!

In the first protest of its kind, participants, including Maria Francisca Conceicao, a 69-year-old seamstress who walked 6300 meters in flip flops, marched for their basic rights. From Largo de Batata, in the Paineros neighborhood to the Bandeirantes Palace in Marumbi (the residence of Governor, Geraldo Alckmin), Conceicao supported others during a severe drought.

Since Sao Paulo has no water tank and the water is turned off to ration supplies, the homeless have no way to store water. This means going several hours with no means of hydration. The protest was designed to hold the government of Sao Paulo and Sabesp accountable for this injustice.

The main request was simply for the government to find a way to reduce the impact on the population – fair enough, it seems. There is also a need for honesty, for officials to be transparent to activists and those they fight for. Reasons for rationing are questionable, and access to documents may shed light on the real situation and what can be done. 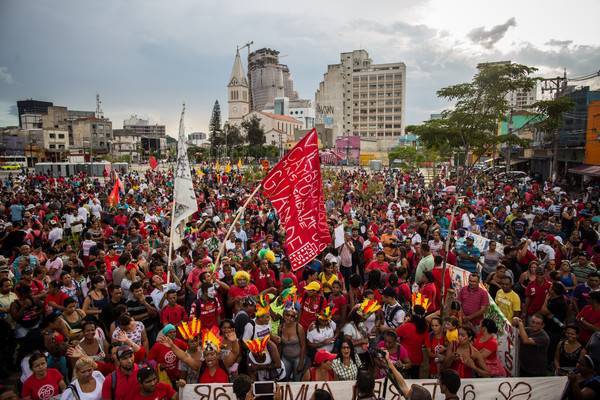 People were creative in the protest, with signs and floats designed to get attention and cause a conviction to the cause. Signs such as “I pay…but I shouldn’t because water is not a commodity”, flew high above the crowd demanding attention. That’s right if citizens cannot afford ample amounts of water, they do without-day or night.

Protestor Reginaldo Silva is a resident of the MTST occupation People’s cup (this was an occupation started at the Soccer World Cup of 2014). He said,

“Police will guard the water for those who can pay for it, while we die of thirst.”

There is hope yet!

Once protestors reached Marumbi, they began to take selfies in front of the elaborate mansions of the wealthy, in an effort to show the truth of unfair privilege. “Look how these people live!” said protestors as they surrounded the Bandeirantes Palace. After the protest reached its end, participants slumped onto the pavements to rest.

As activists reached the point of exhaustion, a committee gathered together to discuss a solution. After about an hour of discussion inside governor Alckmin’s office, eight homeless protestors left with an agreement to offer a supply of 500 liters water tanks to the needy.

Another meeting was scheduled for a week later with Paul Massato, metropolitan leader of Sabesp. This meeting included plans for artesian wells and more water tanks to be distributed to the populace. Water trucks will also be sent to additional areas.

The protest was viewed as a success and activists were instructed to move out. It was a memorable day for the citizens of Sao Paulo, as the privilege was shifted onto an even plane. There is hope yet for the world.