Have you thought deeply about the latest discovery in genetics? DUF1220 – “DUF” stands for a (protein) domain of unknown function –presumably “junk DNA.”

But this one seems to be what distinguishes us as “human” and may correspond to greater brain functionality.

In fact, we possess more than twice the amount of replications (copies) of this protein as a result of the instructions (code) of our genome than our nearest genetic relative –the chimp.

It seems to be clearly related to the growth of certain parts of the brain –and presumably to more sophisticated neural networks.

“DUF1220 is a protein domain of unknown function that shows a striking human lineage-specific (HLS) increase in copy number and may be important to human brain evolution. The copy number of DUF1220 domains increases generally as a function of a species evolutionary proximity to humans.

DUF1220 copy number is highest in human (over 270, with some person-to-person variations). and shows the largest HLS increase in copy number (an additional 160 copies) of any protein coding region in the human genome. 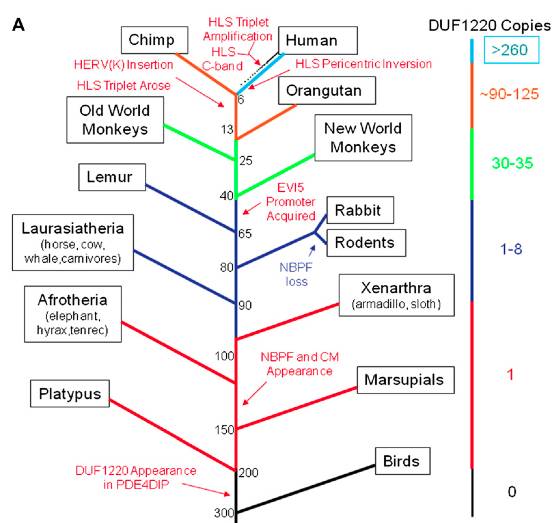 “Unknown function” may be another way of saying “junk DNA” –DNA that is unaccounted for so that current science disregards it but clearly if this is the “Software code” that distinguishes us from other primates in terms of intelligence –it is no Junk.

Wikipedia continues with this nugget:

“DUF1220 domains are approximately 65 amino acids in length and are encoded by a two-exon doublet. In the human genome DUF1220 sequences are located primarily on chromosome 1 in region 1q21.1-q21.2, with several copies also found at 1p36, 1p13.3, and 1p12. Sequences encoding DUF1220 domains show signs of positive selection, especially in primates, and are expressed in several human tissues including the brain, where their expression is restricted to neurons.”

What this seems to mean is that we have identified specific areas of our DNA code (regions of specific chromosomes) that will express growth of higher brain functions. Since we are at the threshold of being able to write our own DNA code, this has immense implications for our future as a species.

Of course, the problem is that this line of inquiry has been hijacked in the recent past by philosophies that have used it to justify genocide and Eugenics. Still, as this blogger says:

“But at least we are slowly stumbling upon some of the answers to our questions. As long as we do not allow our science to be perverted by a misplaced sense of political correctness, we should eventually obtain a fairly clear picture of how larger and more intelligent brains evolved.”

But there is another largely ignored aspect to this discovery.

Where & Who Did This Come From?

First, how and why did our copies of this particular “line of code” simply double at one point in our evolution? Can this be attributed to mutation or chance?

There are a number of ways to approach this.

Modern science simply says that this is the result of natural selection and evolution. But is it reasonable to think that one cell organisms over eons of time will simply create this level of functionality without an intervening intelligence?

We now know that genetic code operates as software.

And we KNOW that software we created -programs like Photoshop or Word –did not “evolve” through chance. They were the result of sessions of planning, development and conscious effort. For want of a better word, they were “designed.”

It is simply an acknowledgment of different levels of “being.” Mind must be seen as what it is –a different “dimension” of being from matter.

Others would have us make the leap that since there are monuments on the planet we cannot explain, a higher form of life (alien) deliberately manipulated our genome, as we are beginning to do with other life forms, and “upgraded” our intelligence in a quantum leap that took us from ape to human.

While plausible on many levels, there is no direct evidence for this at this point. And it begs the question – where and how did these “aliens” evolve? The ONLY direct evidence that exists is this –we now KNOW that something akin to the software humans now creates is operational within our organic being.

The Role of Consciousness

If we “flip” the notion that consciousness is “created” by the brain, and instead become open to the possibility that our brain is a receiver of consciousness, then we can begin to fathom a completely different reality – that the entire universe (of which we know only a tiny sliver through our limited sensory capacity) is immensely intelligent.

Of course, this has profound implications for our personal ego, as pointed out by thought leaders like Eckhart Tolle.

Thought itself –its origin and meaning –comes under greater scrutiny as to its relationship to a reality that is far beyond the capacity of thought itself to completely comprehend; take only the notion of Infinity –which is a word we use to describe the unfathomable but which has no real “meaning” –now the notion of infinity begins to make sense… Infinity would become connected in some way to the Source of the level of meaning and intelligence within which we find ourselves.

Our cosmology would also open immensely. With the primacy of intellect and mind now apparent, we might begin to intuit what “dimensions” actually represent – levels of mental acuity that open to us only when a certain level of being (physiologically, psychologically and chemically) is attained.

This would begin to account for experiences with ESP, drugs, past lives, near death and all kinds of other mental realities which our material science cannot begin to address.

As Eckhart Tolle says, death is not the opposite of life, birth is the opposite of death. Birth and death are both parts of an inconceivably intelligent reality which we experience as Life.

Does this mean that we should not, as a species, follow our discoveries in this area and begin to affect our own evolution? Let’s face it –the genie is out of the bottle.

I would suggest that we have an imperative to do so –but to do so consciously with a profound reverence for higher levels of meaning and intelligence that we will ultimately encounter. This is why the ancients merged science with a sense of the Sacred –because there needs to be a profound relationship of surrender and humility in the face of this recognition.

Our entire notion of a “mastery” over Life must be seen as nonsensical, along with all of the other trappings of our conceptual “understanding” of a reality that cannot be “explained” in our own human terms.

We Need To Change The Way We See

Does this mean that we stop building, growing and evolving? Not at all, that is apparently our nature. But it might mean, for starters, that we begin to observe reverently that the relationships between plants, bees, atmosphere and resources that we have tried to “master” work according to much higher principles and laws.

More important, those principles are not “personal” – if we go extinct as a species “nothing went wrong” –the universe in its infinite intelligence will continue without us. Accordingly, we will need to drop the conceptual conceits, scientific and religious, which have taken us into a state of disharmony with the intelligent natural order from which we “evolved.”

Seeing our minds as a “work in progress” and not the be all and end-all of evolution, we might begin to question everything –including the veracity and even the significance of our own thoughts –which to this point have been the only Mind we’ve ever known.

Instead, upon more direct examination, we must comprehend that we are merely a tiny fraction of All that exists, of an Intelligence that encoded our genes, in the same way, that we have encoded our intelligence into computers.

In our current level of being, we cannot begin to comprehend this intelligence – that is why so many of us simply “worship” It. But just because Life is expressing a level of being an intelligence far beyond anything we can currently comprehend does not mean we should simply accept “not knowing” and surrender completely.

It means that we need to study what “knowing” truly means and perhaps as T.S. Elliot said, we can return to the present and begin to truly know it for the very first time.

Pyramids of Waste AKA The Lightbulb Conspiracy

Legal VS Illegal Substances: The Variations in Public Opinion about Drugs