A drinking problem is one which people who crave alcohol wish they didn’t have. Is alcoholism hereditary or is it caused by other factors?

Alcohol consumption is dangerous when it becomes excessive. We explore whether alcoholism is hereditary and list the factors that contribute to excessive drinking. This article suggests a few ways to help your loved ones cope with alcoholism as well.

Alcoholism, or Alcohol Use Disorder (AUD), refers to a pressing physical need to consume alcohol, regardless of the negative impact it has on everyday living. According to the National Institute of Health, about 15.1 million Americans have a problem with alcohol use.

The National Institute on Alcohol Abuse and Alcoholism refers to Alcohol Use Disorder as ‘drinking that becomes severe.’ It causes difficulties and home and work. Therefore, alcohol abuse is the excessive or inappropriate consumption of alcohol.

Before we explore the hereditary factors of alcoholism, let’s first examine the symptoms and consequences of alcohol use disorder.

Alcohol Use Disorder has three broad categories: Mild, Moderate, and severe. It has 11 symptoms which include:

The Side Effects of Alcoholism 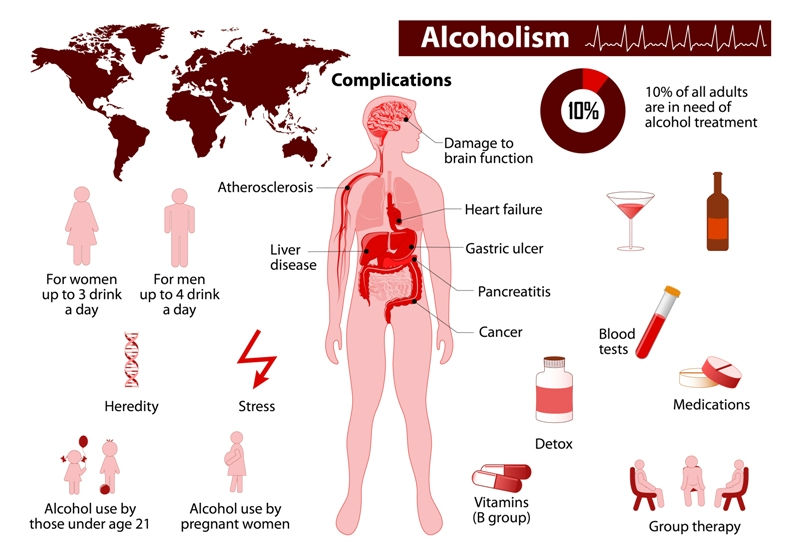 Alcoholism isn’t as straightforward as the occasional hangover; alcohol abuse affects every part of the body. Its impact may not be visible until later in life, which makes it difficult to reverse them.

Drinking impacts the brain over time, and people feel the effects quickly. These include memory loss and a lack of focus — alcohol damages the cerebellum, limbic system, and cerebral cortex. Individuals may also experience a loss of balance.

The heart too is vulnerable to the effects of alcohol. Heavy drinking damages it over time and prevents the flow of blood to other vital organs. It also increases triglyceride levels, creating the likelihood of conditions like diabetes and heart disease.

People who indulge in heavy drinking expose themselves to liver problems. They become susceptible to a condition known as Fatty Liver, and the name is self-explanatory. Excess alcohol causes obesity and the buildup of fats in the liver.

The pancreas is a vital part of the digestive process. Excessive drinking causes the swelling of the blood vessels around the pancreas, resulting in pancreatitis.

Is Alcoholism Hereditary? What Factors Cause a Drinking Problem?

Our genetic structure decides our human characteristics, including behavior. Our parents pass these down to us. Among them is a predisposition towards alcohol use disorder.

People who are genetically predisposed to alcoholism risk becoming addicted. Studies suggest as much. Also, individuals with specific behavioral genes can develop alcoholism. Patients with mental illnesses have a higher likelihood of abusing alcohol than their peers because they turn to drink as a way to cope with their conditions.

Note, however, that many people who are children of heavy drinkers have never taken a drink in their lives. Furthermore, identifying the gene responsible for alcoholism is difficult because it plays a small part in a much larger picture. So to answer the question of whether alcoholism is hereditary, we should emphasize that genetic makeup is only half of the equation; the environment is the other. People do turn to drink to cope with stress at work or in their relationships.

Ways to Cope If Your Loved Ones Have Alcohol Use Disorder

People who are addicted to alcohol at the best persons to stop the drinking habit, but that doesn’t mean that we can’t give them a hand. Whether your loved ones seek addiction help or not, there are ways to help them recover.

First of all, show some concern for your loved ones. They won’t know how worried about them you are unless you tell them so. Discussing the situation may be uncomfortable for you, but it is an essential part of the intervention process.

Bring attention to the drinking, and hope that they will know how concerned you are.

2. Discuss the underlying causes of excessive alcohol use

People seldom drink in excess unless it’s their decision. Many do it to self-medicate and deal with depression.

Try not to sound accusatory when discussing the problem, but ask if they think something could be contributing to their worries. Gauge their response and take it from there.

Think carefully about the reasons for your concern, and be ready to offer them up to your loved ones. They may not realize how addicted they are until they see examples of their behavior for themselves. The reasoning would help them to take the situation seriously.

Giving ultimatums like “I won’t pay your bills until you stop drinking” is probably not going to help; it will only add to the person’s stress and frustration. Pointing out useful programs or introducing them to a professional who can help is a far better strategy.

An addict’s self-esteem is probably not in the best state as it is. Being accusatory will only worsen his or her alcoholism. It is a disease; if you’ve not experienced it, you won’t understand his or her struggles.

Shaming the person will only push him or her further to drink. No matter how difficult it is, stay supportive throughout the person’s recovery.

5. Use the people in your life.

Speak with people who have successfully stopped drinking. Those in an Alcoholics Anonymous group will understand the situation. Ask if they would like to talk to your loved ones. Information from them is more useful coming from them than from someone who hasn’t experienced the situation first hand.

6. Don’t drink around your loved ones

If you know that your family members or friends are addicted to alcohol, avoid drinking around them. Doing so may cause them to want to drink. Don’t enable them by offering drinks to them, even on a special occasion.

In all, alcohol can be hereditary, but other factors, such as the environment, play a huge role too. That said, while people can inherit the condition, they can overcome it with some help from you.

Suffering from Fibromyalgia Symptoms? How to Sleep Better