People have made many different claims regarding Himalayan salt lamps in the recent past. They are becoming popular day by day due to their properties. Owning a Himalayan salt lamp is believed to have a number of health benefits.

First of all, these lamps are said to have the ability to release negative ions into the atmosphere, and this is a good thing. While there is no particular scientific research to prove these claims, Himalayan salt lamps still could have health benefits.

Now that you know how they work, here are some of the suggested benefits of having a Himalayan salt lamp.

You live in an environment that is flooded by an overflow of electromagnetic radiation from your electrical devices, including your appliances, computers, as well as mobile phones.

There are thus many positive ions floating around, and these may subject you to long-term adverse health effects. These effects may include; an increase in stress levels, chronic fatigue as well as a decrease in your body’s response to pathogens.

When you have a Himalayan salt lamp, the released negative ions negate most of the effects of the EM radiation on your health. Although neutralization is more of an overstatement, salt lamps do a great work of reducing the harmful emissions in the atmosphere.

These salts are said to tremendously decrease bronchitis and asthma, which is another reason for their increased popularity. HPS lamps have been known to filter out any microscopic dust, pet dandler particles, mildew, and mold particles in your indoor air.

Many people argue that adding a lamp in your room will help alleviate your allergy symptoms. Some people who have asthma have also testified to benefitting from these lamps in terms of their respiratory health.

Those who appreciate natural living have boasted that the core benefit of having a Himalayan salt lamp is its incredible ability to remove cigarette smoke, pollen and other contaminants from the air.

The hygroscopic nature of the salts in HPS lamps is said to achieve this by trapping the pollutants in the air into their salt crystals. The air in your home may, therefore, become cleaner and healthier for you to breathe.

Because of the way positive ions sap the energy out of your body, the negative ions from the HPS lamps are said to have the ability to make you more energetic.

The same way being in nature rejuvenates you, is the same way lighting a Himalayan salt lamp benefits your mental health and works to your advantage. This is because both nature and these salts have an abundance of negative ions that invigorate your body.

A controversial statement claims that negative ions increase the ciliary activity in your lungs, while positive ions affect it negatively. Cilia are the tiny hairs lining the windpipe. In other words, when the air has more negative ions, the air getting into your lungs is cleaner. This makes it easier for you to breathe.

Salt lamps are also believed to help you to enjoy better sleep. It happens because there is more oxygen getting into your blood as a result of the reduction in contaminants. Better oxygen intake means the better circulation of oxygen into your brain, thus more regular sleeping patterns.

6. Improve your mood and reduces stress

According to claims, the salts put your body in a comfortable, relaxed state. Another thing that the lamps are said to do to help improve your mood is reducing the levels of stress that you are experiencing.

In your day to day experiences, you may come across situations that subject you to stress. The situations may be just the nature of the actual work that you do. Or it could also be an extraordinary event that happens while you are doing your job.

Exposure to positive ions from different origins might contribute to stress. The lamp releases negative ions that possibly counteract the effects of stress on your body.

7. Alleviate colds and symptoms of coughing

The negative ions which emanate from the Himalayan salt lamps have a way of protecting you against airborne germs. According to claims, they remove the contaminants from the air but also improve how your body filters air.

The salts in the lamps enable your body to purify the air going into your lungs by blocking foreign particles. This is effective in preventing the worsening of common symptoms of a cold, including coughing and sneezing.

One of the proposed effects of negative ions from an HPS lamp is to reduce your levels and enhance your concentration. An increased blood and oxygen supply to the brain means that you experience an improvement in your concentration span. 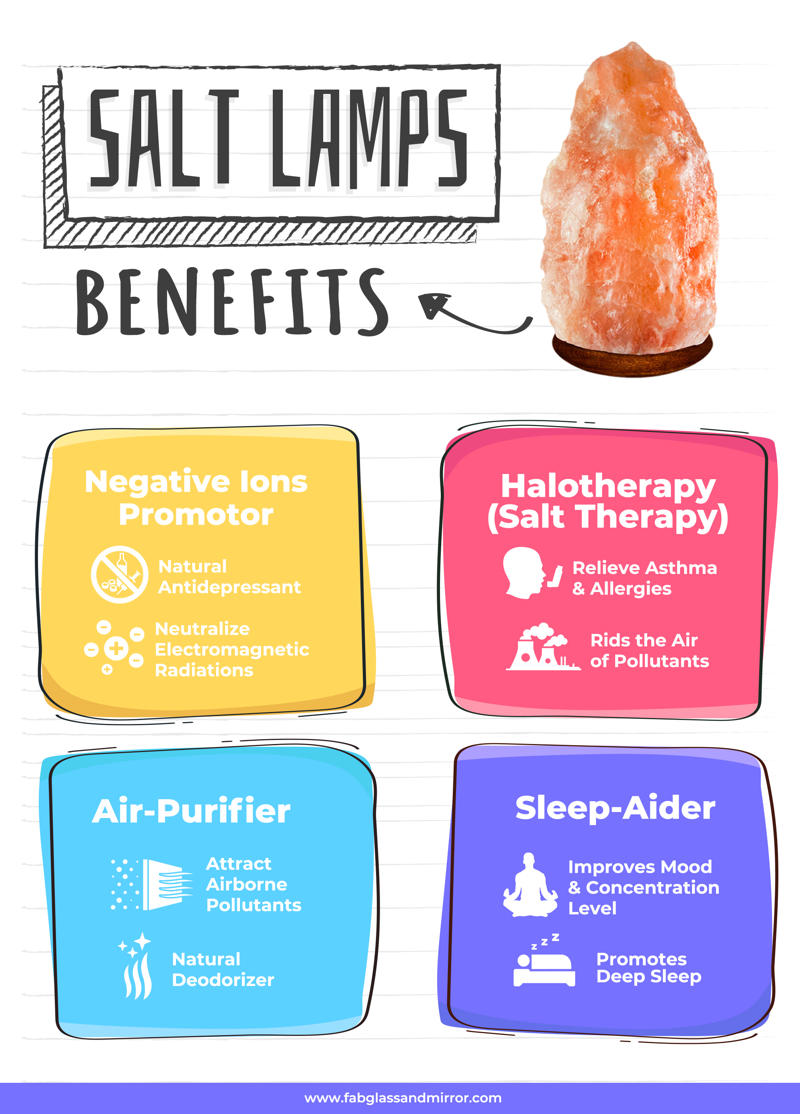 These are just a few of the suggested benefits of having a Himalayan salt lamp in your home or office. While there is no conclusive scientific evidence to confirm them, it’s undeniable that such a lamp would be a beautiful addition to your space.